Most of us labour hard over what to say in our speech. But then, there are also others who should labour a bit harder over what not to say in their speech. These are the public speakers prone to gaffes, misspeaks or bloopers. Whatever you choose to call them, they end up saying things they really should not say. Because knowing what not to say in your speech is key to your success.

But, increasingly, the list of "proscribed" words seems to be getting longer and longer. Because that certainly seems to be the case after the UK Culture Secretary promoted his speech to the Media and Telecoms 2020 Conference today. 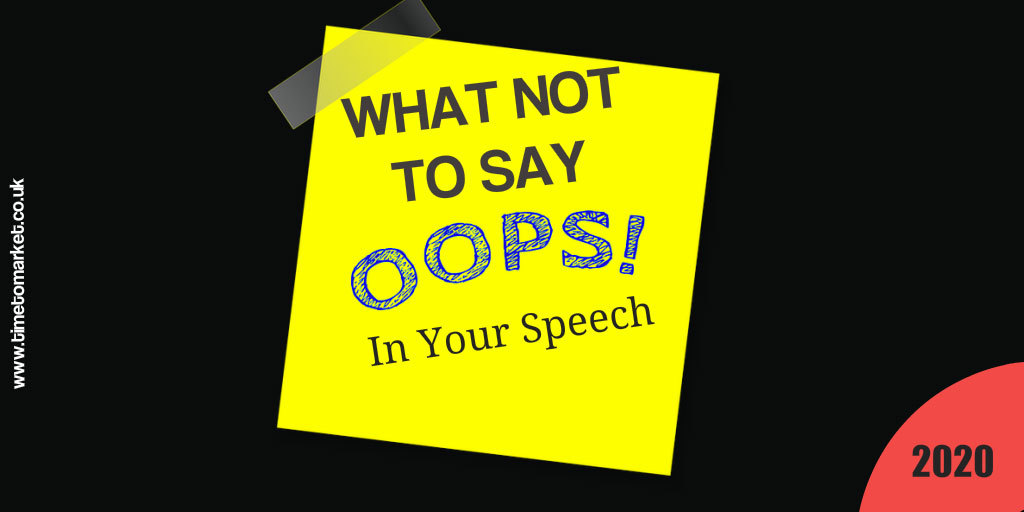 What Not To Say In Your Next Speech...If You Want To Keep Your Job

The recently appointed Culture Secretary, Oliver Dowden, was due to note:

The BBC needs to be closer to, and understand the perspectives of, the whole of the United Kingdom and avoid providing a narrow urban outlook.

And the problematic word or phrase? Urban. Apparently it means black, or the black community in some dictionaries. So, this Latin-derived word now has a whole new meaning. Still, the pre-release of a speech does have an advantage, as the Minister followed this phrase with the following.

By this, I don’t just mean getting authentic and diverse voices on and off the screen - although of course this is important.

But also making sure there is genuine diversity of thought and experience.

Another case in point is President Duterte of the Philippines who was campaigning in 2019 with a speech or two. Because in a speech at the Puerto Princesa City Coliseum in Palawan, he made more than a boast or two about what's inside his trouser department (stop right there, Ed.). Now, you can rest assured this is an extreme example of what not to say in your speech. So, it's not a growing problem.

Lemme just say it. Duterte is the dumbest Philippine president (congrats Erap). What a waste of position that could have potentially been given to some other candidate who could give us more substance. pic.twitter.com/PnKhJym8bx

Another case is the Police Minister in South Africa, Mr Fikile Mbalula. Because he gave a speech in 2017 when he launched a new police squad, the Tactical Response Team. His speech to some 200 recruits of the police squad at Pretoria West Police Academy brimmed with words and phrases that you might prefer not to say in your speech.

Here's What Not To Say In Your Speech

Good grief. What was he thinking, might be your reaction. He's got a grip on the subject, might be your other reaction! But he must have realised that people were filming him. Because that's what Ministers expect. Yes, we know that sometimes a gaffe can happen, particularly when you miss your autocue practice session.

But the Minister's words didn't get any better in terms of what not to say in your speech.

These people are undermining the sovereignty of our country. We must clamp down on them and today I am saying you must be merciless to dangerous criminals. Do not blink when you deal with a criminal, run them down if needs be and then you must return fire with fire and protect our people against them.

I agreed with the first phrase. But then he went right off track again. Because I can't think of many other Police Ministers prepared to condone his police officers dealing with criminals in this fashion. But, you know what? It got even worse.

Fikile Mbalula: What Not To Say In Your Speech

Even if you do not have a warrant of arrest, slap them. Break the law progressively and let me worry about court cases

So, as a case study in what not to say when you give a speech Mr. Fikile Mbalula is in pole position. Top dog. Head honcho. The boss.  The dog's...(stop right there, Ed.).

Now, the question has to be how long he's going to keep this Ministerial position with remarks such as these. He was appointed by Jacob Zuma, so the sense is that he's got some time.

5 key pointers for what not to say when you give a speech:

But he did have a few good-sense nuggets in his speech to the young officers. Because he certainly has good cause to impress upon them the need for fitness and health. So he did.

Big bellies are for the Minister alone. Leave that for me so I can enjoy myself.

The reaction of his audience is of course, superb. They like his material. They are really engaged. And that leaves us with the feeling that the Police Minister is more than capable of knowing what not to say in a speech. I suspect that he wanted to motivate his new unit. Because a motivational speech was necessary. But then he got carried away. Big time.

He ignored the fact that his speech was televised. And that, of course is the real problem here. The Minister's material is not for the world's cameras. There's a time and place for most things, but a public speech needs more finesse.

Of course there will be a time when you need some help with a speech. Help to work out what to say in your next conference speech. Or, perhaps what not to say in your speech. On these occasions, we can help. Since a well-timed public speaking skills course or coaching day can prove just what you need. Please don't hesitate to get in touch when the time is right.