It's true to say that a Boris Johnson speech managed to energise the Conservative conference in Manchester yesterday. The job needed doing. So, Boris stepped up and did it. And he did it very well, since he clearly enjoys the visionary speech format. But this speech proved more than just vision. Because it was a wide-ranging summary of international affairs and vision. A vision of Britain in the future. 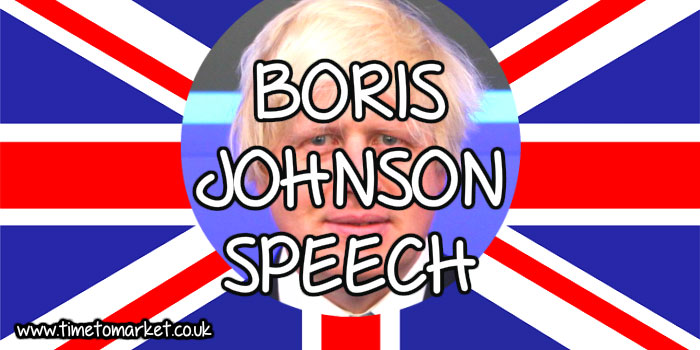 His introduction took the form of a sympathetic word to Las Vegas with a reference to the atrocity in Manchester earlier in the year.

He then moved on to a word or two of thanks to the extended team at the Foreign and Commonwealth Office. This now appears to be normal for a conference speech. For now, at least.

Boris Johnson Speech Has A Laugh

His speech was good fun. Because Boris gets the jokes out in a form that generates a genuine laugh. He knows the laugh is coming and he waits for it. It's a good technique and it's clearly well-practised.

Every week I pick up British-edited international magazines, of the kind that you will find in the briefcases of jet setting consultants.

That Nato bashing, trident scrapping, would-be abolisher of the British army whose first instinct in the event of almost any international outrage or disaster is to upend the analysis until he can find a way of blaming British foreign policy.

And whose response to the grisly events in Venezuela is to side with the regime – simply because they are fellow lefties.

A Boris Johnson speech manages to combine the quick fire use of words, change of pace, pause and expression to get a laugh where others would struggle. So, he didn't deliver this as a funny speech. It's just that he kept his audience involved, engaged and energised for the full 30 minutes or so...with a good laugh every now and again. Great technique.

It's especially valid when you recall that not everyone can work with humour in the conference speech. Last week it's true that Emily Thornberry struggled with her jokes. And in the previous week, Vince Cable appeared ill-suited to a funny narative.

Yes, there's humour. But his delivery also depends on a pace that's always changing. This is important in a Boris Johnson speech. Tone and emphasis on key words help him a great deal. As do his word choices...and his turn of phrase.

the syncretic genius of our country

I mean, who else would say that? Well, perhaps a recycled speech by Michael Gove. Or how about, "dubitation about Britain and the world." Most of us have to look up the word in the dictionary. Or, what about the turn of phrase here:

Every day a distinguished pink newspaper manages to make Eeyore look positively exuberant and across the world the impression is being given that this country is not up to it. That we are going to bottle out of Brexit and end up in some dingy ante-room of the EU, pathetically waiting for the scraps but no longer in control of the menu.

The reference to Eeyore is possibly a topical nod to the latest Goodbye Christopher Robin film opening. But it's the dingy ante-room that is all-important. Can't be bettered.

And, of course the change of pace was noticeable here.

Of all the areas where Corbyn is content to talk this country down, there is none more ludicrous and vacillating than his policy on Brexit.

Faster than one of those members of the shadow cabinet who gets sacked before she knows she has even been appointed.

A kind of manifestation of Heisenberg’s uncertainty principle.

He reads his speech from notes. That's a rarity at today's conferences, but we spotted David Davis using a script today as well. Because Boris uses a script, he's prone to the odd word mangle or trans-literal. This never fazes him. He knows it's not right, so he fixes it.

And, sometimes he even gets his audience to laugh with him with an ad lib. Perhaps it is his preparedness to ad lib that makes his script a favourite choice ahead of the autocue.

And, here he mixes word choices, pace change and self-deprecation.

Just in the last few weeks I have seen British troops training the Nigerian forces to defeat the numbskulls of boko haram around Maiduguri – where British doctors are tending the maimed victims of terror and as our helicopter swooped over the burned and deserted villages they said there was a risk of pot-shots from behind, and I said it was an occupational hazard in my line of work.

We had heard that the conference audience queued for more than an hour to secure places in the venue for this speech. I reckon that they did well to secure their places. It was definitely worthwhile.

Rising to his peroration, again he kept things simple and elegant. Because he can do that as well.

We are not the lion.

We do not claim to be the lion.

That role is played by the people of this country. But it is up to us now – in the traditional non-threatening, genial and self-deprecating way of the British – to let that lion roar.

It can't be faulted as a Foreign Secretary's speech.

You can always discover more public speaking tips with our regular series of tips and podcasts before your next conference speech. But when you really want to extend your public speaking capabilities, you are always welcome to speak with us about further coaching for you or your immediate team. Please don't hesitate to get in touch.