President Obama delivered his second inauguration speech today to a smaller Washington D.C. audience than the one that listened to his first presidential speech in 2009. But an 800,000 crowd remains pretty big. It’s fair to say that people were very expectant about the Presidential inauguration speech. 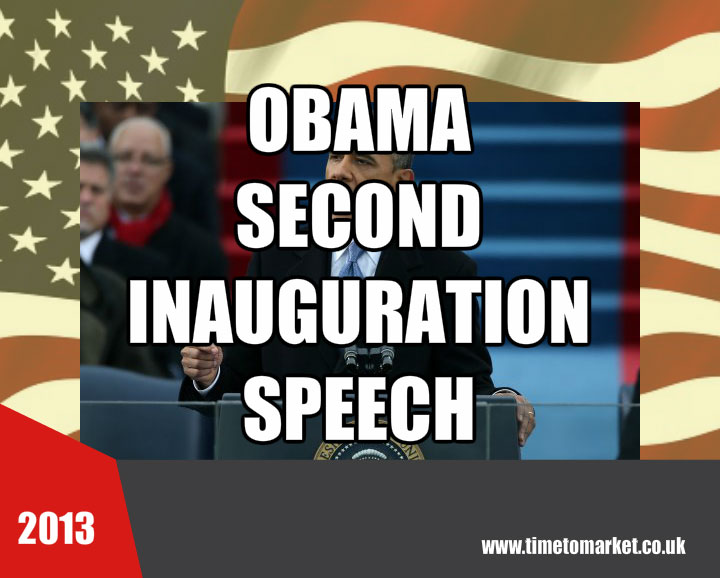 Speaking from autocue, his introduction referenced the American Declaration of Independence…setting the substance of his speech into the context of US history:

What makes us exceptional – what makes us American – is our allegiance to an idea, articulated in a declaration made more than two centuries ago:

He did just that, but this early section of his speech proved over-elaborate.

Today we continue a never-ending journey, to bridge the meaning of those words with the realities of our time.

The patriots of 1776 did not fight to replace the tyranny of a king with the privileges of a few or the rule of a mob.

and later, he noted a particular Martin Luther King speech:

We, the people, declare today that the most evident of truths – that all of us are created equal – is the star that guides us still; just as it guided our forebears through Seneca Falls, and Selma, and Stonewall; just as it guided all those men and women, sung and unsung, who left footprints along this great Mall, to hear a preacher say that we cannot walk alone; to hear a King proclaim that our individual freedom is inextricably bound to the freedom of every soul on Earth.

It was Martin Luther King day. So that was neatly done.

For a steely speech there were some characteristic flights of rhetorical fancy. One favourite was his repetition of “our journey is not complete.”

For our journey is not complete until our wives, our mothers, and daughters can earn a living equal to their efforts.

He repeated this key phrase several times as he reached the conclusion to his speech.

Undoubtedly his audience heard the call for togetherness and co-operation in this speech. But will they act upon the call? And did the speech meet people’s expectations? That’s another matter…beyond this second inauguration speech alone.

When you too want to meet people’s expectations with your speech you can turn to us for help. A well-timed public speaking skills refresher might well be the answer. Because this half-day skills coaching session aims first to boost your public speaking confidence. And, second, it aims to give you the skills you need for the big event. So, please don’t hesitate to get in touch when the time is right.