The Governor of the Bank of England’s Inflation Report for May has triggered a series of speeches. In turn, these have laid out the travails of the UK economy. His speech undoubtedly contributed to the Prime Minister’s speech the following day. Also contributing to this stormy Cameron speech was the political uncertainty in Greece and the recent elections in France. 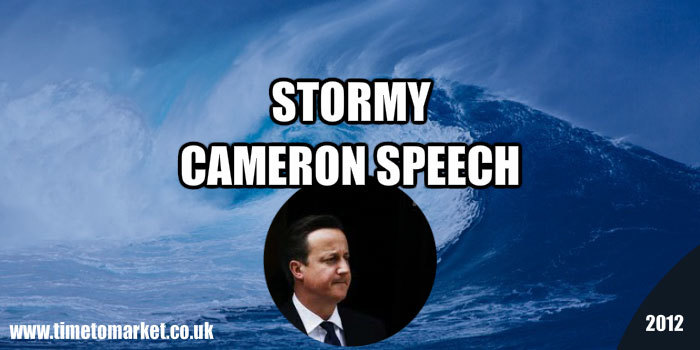 A Stormy David Cameron Speech Awash With Metaphors In 2012

But, before we got stuck into the weather metaphors in this stormy Cameron speech we heard an absolute favourite.

The Eurozone is at a cross-roads. It either has to make-up or it is looking at a potential break-up.

His audience was left in little doubt right from the start:

We are living in perilous economic times. Turn on the TV news and you see the return of a crisis that never really went away. Greece on the brink; the survival of the Euro in question. Faced with this, I have a clear task: to keep Britain safe.

So, his speech brimmed with stormy metaphors.

Not to take the easy course—but the right course.

We cannot blow the budget on more spending and more debt.

…the turbulence coming from the Eurozone.

I believe we can see Britain through the storm.

All these stormy metaphors remind us of the George Osborne mansion House speech and his conference speech in Manchester. Both, of course, were equally storm-laden.

This proved to be an effective and well-written speech. There were one or two weaker elements, not least when he discussed the World Trade Organisation:

And most importantly, I want us to move forwards with “coalitions of the willing”, so countries who want to, can forge ahead with ambitious deals of their own because we all benefit from the increased trade and investment these deals foster.

Concluding this stormy Cameron speech, the Prime Minister returned to his stormy theme:

I cannot predict how this crisis will end for others. And I cannot pretend that Britain will be immune from the consequences, either.  But this I can promise: that we know what needs to be done and we are doing it.

Get the deficit under control, get the foundations for recovery in place, defend the long-term interests of our country and hold our course.

As Prime Minister, I will do whatever it takes to keep Britain safe from the storm.

Something tells me to anticipate many more speeches with this metaphorical theme before the storm is calmed.

You can always read more tips for public speakers with our regular series of tips, podcasts and videos. And, when you are ready to invest further in your own public speaking skills, then please don’t hesitate to ask about training or coaching.