Michael Gove’s speech at the annual Brighton College Education Conference proved well-worked and finely delivered. Yet something was missing. 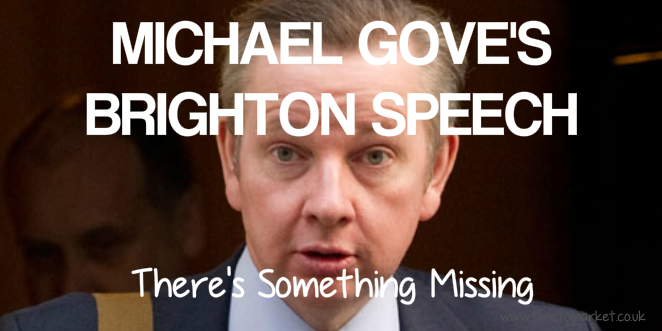 You sensed that he had more to say in this speech than he actually did. Firstly, the title to his speech was anaemic:

A coalition for good – how we can all work together to make opportunity more equal.

Right. If the measure of a good title for a speech is that no-one could possibly disagree, then this was a superb title. However, a title should also suggest meaning, significance and relevance. This title is waffle, and the Secretary of State for Education will know that.

His introduction proved mesmerising. Since it highlighted the sheer number of independent school educated men and women who’ve achieved fame or influence in Britain.

It was thought provoking stuff. But why did his list appear to miss out business and military leaders? Perhaps the level of social inequality is less in these two sectors.

The Minister’s choice of words and use of language prove an asset in this job. That’s because he chooses his words well and his language is finely mixed:

But because I believe such fatalism in the face of circumstance is a profoundly reactionary doctrine – it denies the possibility of progress through human action, it says to all those driven by idealism to enter the classroom that they are simply spectators in a pageant of futility.

Concluding his speech he wrapped up all the loose strands of his core argument. Deprivation doesn’t have to be destiny. Education can fix it. Noting the opposition to his plans, the Secretary of State used some repetition in a rare rhetorical flourish.

But – seriously – we know we are making progress when we hear the opposition from vested interests – from those in trade unions who put adults interests before children’s, from those in local Government who put protecting their power before fulfilling children’s potential, from those who have acquiesced in a culture of low expectations who resist any form of accountability for failure.

This speech is not likely to be pivotal. It certainly reflects well upon the speaker. But the more concerned audience members might still ponder the roles of selection and the place of grammar schools in State education. He mentioned neither in this speech. Was that the missing something? Whatever your thoughts, there are more high marks for this Amanda Spielman speech.

You can always join a public speaking course to learn about the presentation title effect. And with more than 40 training centres in our network, you are not that far away.