It was time for a George Osborne speech at the Conservative party conference in Manchester yesterday. And he turned in a decent, if stormy, speech. 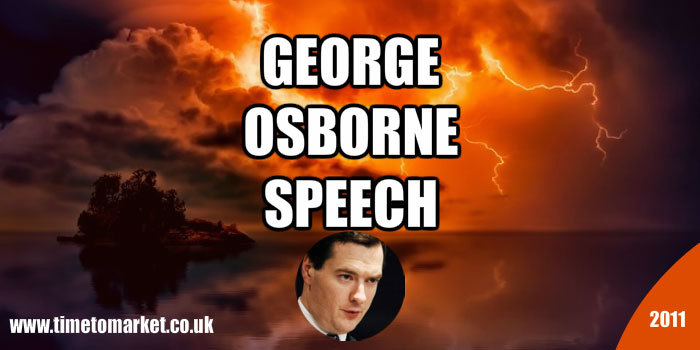 He used stormy metaphors when describing the state of the economy and then linked his entire speech together with this theme:

Together, we will ride out the storm.

So that together we will ride out the storm.

That’s help for families, so together we ride out the storm.

So, this was not quite the “broad sunlit uplands” peroration of the Winston Churchill speech, “Their Finest Hour”, in the Commons on 18th June 1940…but we guess the inspiration!

In Praise Of Pickles

His 30 minute speech managed to reference his many colleagues…quite important when you consider the back-stabbing tendencies of your typical politician. He praised his Treasury team, the Euro-avoiding Foreign Secretary, William Hague, and even Eric Pickles:

“Economic advisor to Gordon Brown”.
I’m not sure I’d put that on my CV if I were Ed Balls.
It’s like “personal trainer to Eric Pickles”.
Although I have to say, when it comes to chasing down council waste, no-one runs faster than our Eric.

His speech held together with some good structure signals. We heard:

Today, all around our country–indeed, all around the world– people are anxious, worried about their jobs, their families, how they’re going to pay the bills.
I come to you with words of resolve, determination, confidence and belief.

Tomorrow morning I will travel to a meeting of European Finance Ministers in Luxembourg.

Right! Not inspiring, but we got the idea.

What were those mistakes?
There were three above all…and they are all connected with each other.
First, the last government borrowed too much money…The second…And there was a third mistake.

His speech certainly borrowed from the public speaking of his predecessors. And that’s no bad thing. But he wasn’t confident enough to snag one line entirely for himself. It’s true that President Obama borrowed word for word from Martin Luther King in his “Now is the season for change” healthcare speech to Congress. But that’s different. George settled for:

The time to resolve the crisis is now.

This George Osborne speech took full use of a range of rhetorical devices and flavours. He’s not afraid to experiment. Short sentences and lists featured heavily. Topical jokes and barbs at the expense of the Labour party were frequent—as might be expected from this speaker. His speech included several sections clearly written since Ed Miliband’s speech in Liverpool last week…second mover advantage.

But he’s also keen on one running gag in particular. The one about the roof. You know the one. We heard it last year in the Osborne conference speech at the Conservative party conference in Birmingham:

So they failed to fix the roof when the sun was shining.

And this year his speech included:

They’ve got to get out and fix their roof, even though it’s already pouring with rain

It was the one that Ed Miliband used in his generation Miliband speech at Labour’s party conference last year:

I tell you one thing, for the eighteen years they were in power the Tories did nothing to fix the roof when the sun was shining.

And it’s pretty much the same as that used by Gordon Brown in his 2010 Labour manifesto speech:

For for those who say “Look at what, together, we have built…we didn’t just fix the roof” we built the entire hospital.

Ah, these clever politicians. This was a well-written speech that appealed to his audience.

Of course you can always discover plenty of public speaking tips and techniques with our regular series of posts, podcasts and videos. And, when you want to master the art of the stormy metaphor, then you can always join us for a training course or coaching session. On you own, with a group or your own team at work, it’s your choice. So, when the time is right, please don’t hesitate to get in touch.