Giving a keynote speech at a major industry conference or event such as the Consumer Electronics Show (CES) in Las Vegas is one thing. And appearing on a panel is another. Keynote speakers and panel speakers have much in common, in fact they are often the very same people. And that’s very clear after the CNET panel in Las Vegas. 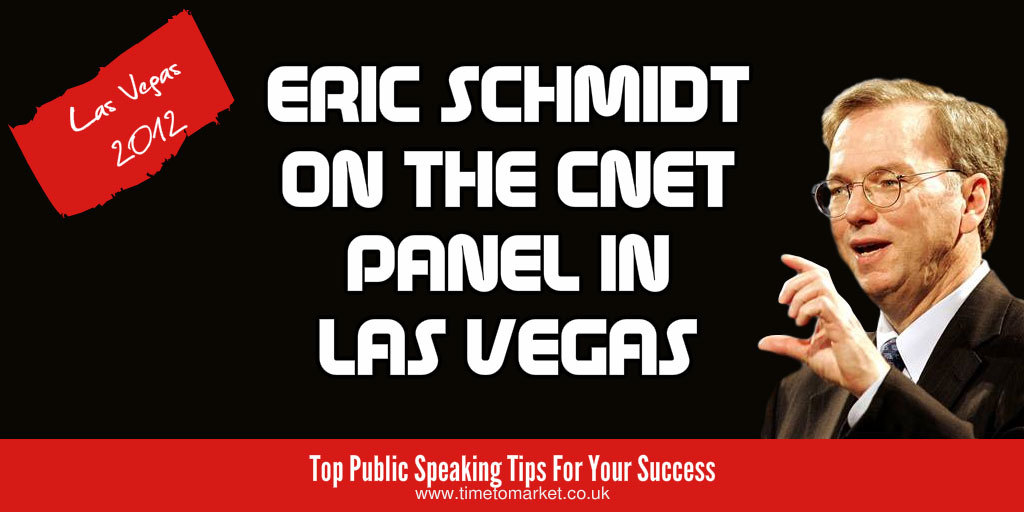 But there’s a difference. Your conference speech is planned, prepared, scripted and rehearsed. Your contribution as a panellist is not. Yes, you should rehearse the questions you expect to receive. But there’s always the chance of something out of the ordinary.

Google Chairman Eric Schmidt is a case in point. He’s never that shy of speaking his mind. Hence, he’s an inveterate conference speaker with events such as this MacTaggart speech in Edinburgh.

So his appearance on the Next Big Thing panel organised by CNET was an eye-opener.

It wasn’t disastrous. It simply highlighted the dangers of management-speak, jargon and techno-babble in your presentations, speeches or panel sessions.

His debate featured heavy use of management-speak and techno-babble. Thus, his audience heard:

Microsoft’s trapped in an architectural transition problem they may not get through.

and, talking about Android, he noted:

differentiation is positive, fragmentation is negative,

…what people really care about is an interoperable ecosystem of apps.

Superb. And because people in his audience were a bit puzzled with his words, he added:

Differentiation means that you have a choice and the people who are making the phones, they’re going to compete on their view of innovation, and they’re going to try and convince you that theirs is better than somebody else.

Clear? No, I’m afraid you lost me there Eric.

It’s amusing to listen to this gobbledygook for a while. Though the novelty wears off quickly. You’d do better to ditch the management-speak, bury the techno-babble and focus on good plain words when it’s your turn to speak as a panellist. We can’t all be the Google Chairman on the CNET panel in Las Vegas!

You can always discover plenty of public speaking tips with our series of tips for speakers and presenters. And, with more than 100 top tips for speeches and presentations of all descriptions, there’s something for everyone. Plus, when you want to really boost your public speaking skills, then you’ll find that a training course or coaching session will do the trick. So, when the time is right, please don’t hesitate to get in touch.