Nick Clegg rounded off the Liberal Democrats conference in Birmingham with a conference speech that proved technically good. But at 45 minutes it was perhaps a bit on the long side. What’s more, it didn’t seem to be a sell-out audience for the Nick Clegg conference speech. So, perhaps that was disconcerting for the Deputy Prime Minister. Because at times the conference room seemed to be only 2/3 full. 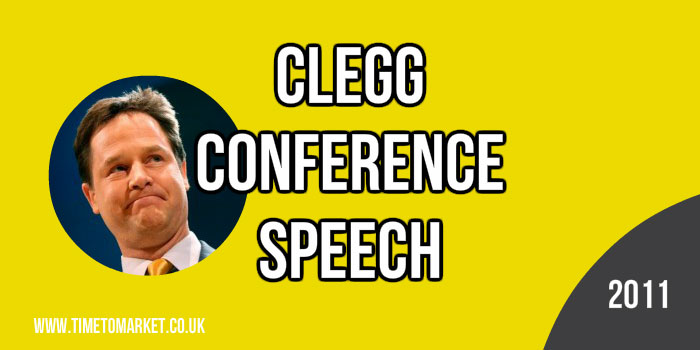 This was a speech in which he sought to set out the lessons learned in government and acknowledge the problems faced in the last 500 days. And that was his introduction. However, no fanfare and no great rhetorical flourish. So it was altogether quite different to the earlier Spring Conference speech.

He referenced people in the audience throughout his speech. Good, because he tied in all wings of the Party. So, we heard of Simon Hughes, Paddy Ashdown, Tim Farron, Vince Cable, Tom McNally among others. These references worked with the possible qualifier of the mention of Simon Hughes…

He also used some good contrasts in this speech:

After the so-called masters of the universe turned out to be masters of destruction instead.

Reason not prejudice. Compassion not greed. Hope not fear.

Proving his mastery of the simple story telling technique his speech included these story gems:

On Saturday I met a group of young people…

I’ll never forget the woman I met in Tottenham…

In Manchester I met a cafe owner…

Throughout his speech he showed off some commanding language and diction. But now and again we heard words such as:

The Sidy of London

Permissible…if you always speak like that….BBC foreign correspondents are a case in point. However, I sense that this was an occasional speech style fashioned for the mass market. Dumbing down?

His speech also included the odd piece of cliché and a few hackneyed expressions. For example we heard:

…none of us thought it would be a walk in the park,

Ah yes, the proverbial walk in the park.

Rhetoric In The Clegg Conference Speech

He also used repetition throughout his speech including one that recurred at key moments:

Not easy, but right.

When he concluded his speech he used a quote that he spotted after the Summer riots in London:

Britain is our home. We will make it safe and strong. These are our children. We will tear down every barrier they face. And this is our future. We start building it today.

So that was it. 45 minutes of technically very competent speaking. And it certainly lacked a bit of the passion we might have expected.

We have all sorts of tips and advice for giving your conference speech. Or, when you want to really develop your conference speaking skills you can always ask us to organise a public speaking course for you and your team. Please don’t hesitate to get in touch when the time is right.