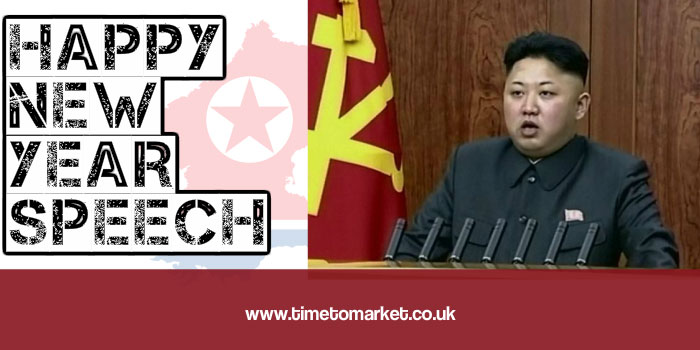 And what a prepared text it is, more than 4,000 words and titled, “Report on the Fifth Plenary Meeting of the Seventh Central Committee of the Workers“. Now doesn’t that make you feel good to be alive. Still, it all goes to emphasise the sheer unpredictability of both country and Leader. So, it does seem that he’s going to be quiet this New Year, not dissimilar to his speechless dictator father, Kim Jong-il.

New Year Speech With A Difference

So, the speech at New Year has taken off. But is it any better for it? That’s the big question. Particularly when you consider that most of these speeches aren’t actually given as a speech at all. Posted on websites, social media, or released through PRNewswire they are pretty devoid of the human emotion that they seek to inspire with their message. They are anodyne at best.

That’s the case with most of them. One stands out, of course. Since it stands out for all the wrong reasons. Of course it’s the televised New Year speech of North Korea’s despotic leader Kim Jong-un.

We’ve considered his new year’s speeches before. Yes, he has revived a tradition of New Year speeches in his country since the first Kim Jong-un speech in 2012. But, not much has changed during the last year. His speech still called for better ties with South Korea.

Only, we believe, that was something his Uncle, Jang Song Thaek, wanted to improve. His reward? Execution. And the execution of his uncle and other family members took up a chunk of this 4,000 word, 25-minute speech. Indeed the family members were described as:

Peace And Goodwill In North Korea

So, that was just about it. He covered all the usual themes in this speech to celebrate the new year: factionalism, re-unification and nuclear catastrophe. Quite a prospect for another new year on the Korean peninsula.

You can always discover other themes for your New Year Leadership Speech with top tips from Time to Market.