No Speech Is Better Than Any Speech For Tom Watson

We've all heard of the "no platforming" movement. It's rife in British universities and also those in the USA and Canada, where it prevents people from speaking if members of their potential audience might disagree with them. Yes, it all adds up to a very one-sided "dialogue". But, would conference organisers adopt a similar stance? A case of no speech on the basis of views held or loyalty? 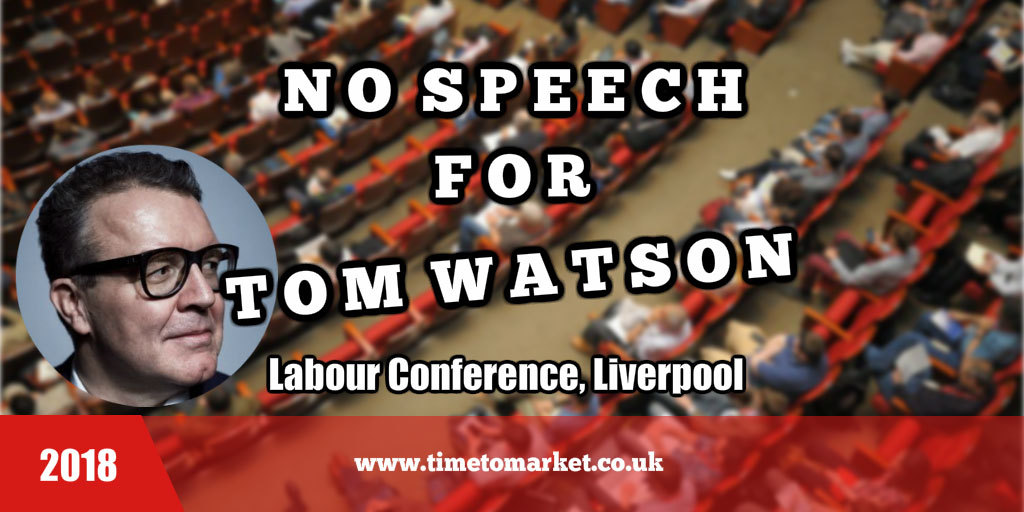 No Speech For Tom Watson At The Labour Conference, 2018

No Speech For Tom Watson

People asked questions back in the Summer when early drafts of the schedule appeared to make no mention of the second in command. The same Tom Watson, of course who has incurred the wrath of the Leader over his stance on anti-semitism.

Well, now that the final schedule is available, there's still no mention of Tom Watson on the main stage. That's a main stage he's spoken on every year since he was elected Deputy.

Of course there's a ready explanation for all of us conspiracy theorists. Because Tom considered that a busy conference schedule would be better served with Labour's MEP Leader, Richard Corbett, speaking for 10 minutes. And therefore, Tom will speak only at fringe meetings for activists. So, a ready explanation for this notable absence.

No speech for a slimmed-down Tom Watson in a bulging conference schedule. Believable? Yes, it's not unusual for people to skip a speech opportunity. There were keynote speech questions when Steve Ballmer chose not to speak at the Consumer Electronics Show in 2013. This, of course was a platform held by Microsoft for more than 20 years. So, it does happen.

But is there more to it? Probably. Because we know that conference organisers typically have a view on speech content. They have a guide on what to say and what not to say. They also supervise who speaks and who has no speech. And there's no suggestion that the Conference Arrangements Committee in the Labour party is any different.

Most usually their decision to award a speaking slot comes down to merit or status. Good speakers tend to speak. And so do speakers with high status. Other speakers might edge their way onto the schedule. But their time behind the microphone is limited. So, we know they control the schedule.

No Speech For George

And the evidence? We know that George Osborne was on the receiving end of a no conference speech decision by the Tories in 2008. On that occasion the hapless future Chancellor was thought to be too lightweight for a heavyweight economics speech!

And then there was the autocue speech prompter plot in 2016. On that occasion, Clive Lewis the MP for Norwich was left banging the wall backstage in frustration. All because someone, unknown, had edited his carefully prepared speech. Yes, it happens.

And let's not forget the Tomi Alhonen presentation in Canberra in 2010. The conference organisers cancelled that presentation. Why? They cited jet-lag. But, actually the content of the presentation was at odds with the main sponsor of the event.

So, if you want to avoid the predicament of no speech at your annual convention then there's some work to do with conference organisers everywhere. Good luck.

You can read plenty of tips for public speaking with our regular series of tips, podcasts and videos. And, when you want to avoid the iniquities of no speech at conference, please don't hesitate to get in touch about public speaking skills training or coaching.