An End To The Waiting Game

The waiting game is over. The Prime Minister has given the long-awaited David Cameron EU speech. And what a speech it was. Delivered in London and not the Netherlands as originally planned this Cameron Europe speech was close to epic in its length. No doubt the invited business audience felt quite weak at its close. It was an 8 a.m. start after all. 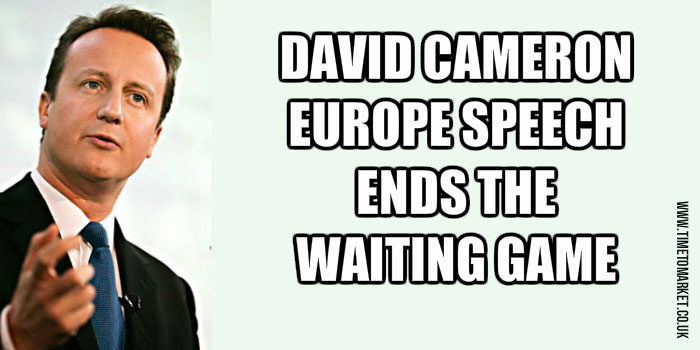 His speech was trailed as a Europe speech. And that’s what his audience got. A well-constructed and well-prepared speech with Europe at its centre.

It’s clear that Mr Cameron knew he had a lot of material to get through. His delivery was rapid and at times breathless. So, he positively sprinted through this speech that was timed at just under 40 minutes. Compare this of course with the lengthy speech of José Manuel Durão Barroso.

As he read from autocue, the Prime Minister began his speech with an introduction that referenced the outbreak of the Second World War seventy years ago. he also placed Winston Churchill and the collapse of the Eastern Bloc into the mix. Certainly an eventful introduction that set the EU project into a context that includes Britain.

As he read his speech he appeared animated. He crouched into his familiar (dispatch box thumping) body position to define his key points.

His speech was rich in technique. Position takers, always a politician’s favourite speech technique were plentiful. Given the need to get his position straight with his own Party, his Westminster allies, the opposition and the rest of Europe position takers were expected:

Some people say that to point this out is irresponsible, creates uncertainty for business and puts a question mark over Britain’s place in the European Union.

But the question mark is already there and ignoring it won’t make it go away.

In fact, quite the reverse. Those who refuse to contemplate consulting the British people, would in my view make more likely our eventual exit.

Some argue that the solution is therefore to hold a straight in-out referendum now.

I understand the impatience of wanting to make that choice immediately.

But I don’t believe that to make a decision at this moment is the right way forward, either for Britain or for Europe as a whole.

There were few light moments in this speech. But there was one:

Let’s stop all this talk of two-speed Europe, of fast lanes and slow lanes, of countries missing trains and buses, and consign the whole weary caravan of metaphors to a permanent siding.

So, when he reached his peroration the Prime Minister used a classic set of word pairs to consolidate his position:

Because with courage and conviction I believe we can deliver a more flexible, adaptable and open European Union in which the interests and ambitions of all its members can be met.

With courage and conviction I believe we can achieve a new settlement in which Britain can be comfortable and all our countries can thrive.

You can’t deny that he gave a well-worked speech. Yes, there were a few fluffs along the way as the Prime Minister read the autocue. But that wasn’t an issue. It happens, particularly when you read your speech so fast. But. that’s why the prime Minister does like to snatch some speech practice.

Don’t forget that you can read more public speaking tips with the Time to Market newsletter, Telling It Straight. Because you might well want to know whet is a good speed for a speech? And, when you are ready to boost your own public speaking skills, then you can always take advantage of public speaking training courses or coaching. So, when the time is right, please don’t hesitate to get in touch.