The toast, “skål” sealed the wedding speech of the Groom at the wedding breakfast of Princess Victoria and Prince Daniel in Stockholm, Sweden. Prince Daniel’s speech was a tour de force of speech writing and delivery. Verbal images of and references to his bride flowed freely and assuredly. It was his assurance that was most marked; not least in the company of most of Europe’s remaining Royal families. 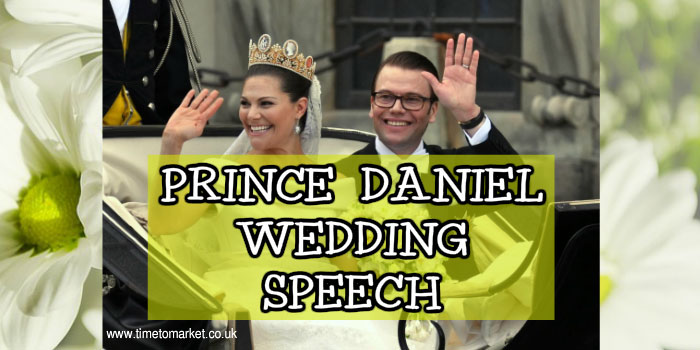 His speech deftly referenced his “commoner” background using the Brothers Grimm Fairytale, “The Princess and the Frog.” As an analogy it worked well and highlighted how in touch he is. That’s because just about every media story about the wedding had referenced his normal non-royal life.

In his speech he paid tribute to his new parents-in-law, the King and Queen of Sweden. He noted their role in supporting the bridal couple in their nine year relationship. Then, he thanked his own family and everyone who had supported the couple. In this, Prince Daniel’s speech completed all the main requirements for a good groom’s speech. A perfect job.

A Short Wedding Speech To Mark The Big Day

It’s a relatively brief speech. But it’s one that is filled with sincerity and a loving regard for his wife. Thus, it’s a charming speech that many grooms might want to watch before they marry their very own princess.

So, whether it’s a wedding speech, a best man’s speech or any other type of speech, then a day’s public speaking coaching might be just the ticket. Aim to get yourself ready for the big day with a public speaking session. Build your confidence, settle your nerves and learn new public speaking skills. You can organise a coaching session at one of more than 40 training centres in the UK. So, please don’t hesitate to get in contact.