No Match For School Autocrats

So, here’s the scene: A young man at school plans to run for student government on his local school council. He prepares and writes a speech that he will read in a live broadcast to his fellow students–the voters. He submits his speech for clearance by the school authorities, because those are the rules of this particular democracy. The speech is cleared and he is ready to speak. But, that’s where the trouble starts for this public speaking democrat. 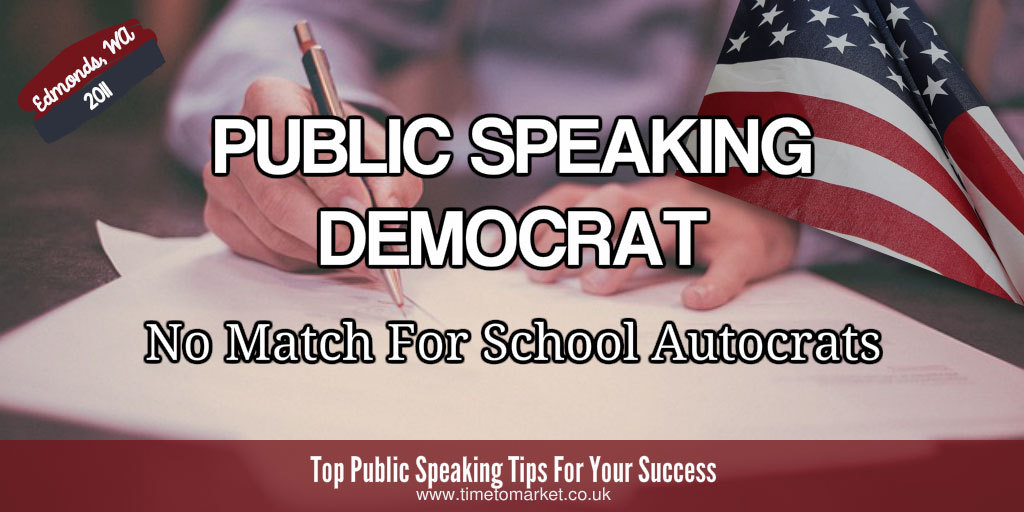 Because at that point, the student, decided on a different plan. When it came to the live broadcast to his fellow students he read out a different speech; a speech that outlined in some detail all the problems of this particular school body. So, he went off script with a new manifesto for student action. A coup?

Well, no, not exactly. Because the student was duly disqualified as a candidate. And he then spent a day and a half in “solitary confinement“…the travails of the public speaker with a point to prove!

So, where was this little cameo performance played out last week? Egypt? China? Myanmar?

No. It was the United States of America… land of the First Amendment. The school in question was the Edmonds Woodway High School in Edmonds, Washington. Now, it’s not the first time we’ve reported on this sort of thing. Because it’s a frequent occurrence as this graduation speech ban makes obvious. But this time it’s more chilling for any public speaking democrat among us.

We certainly honor the First Amendment, but we also know that with that freedom comes some responsibility.

I paraphrase. Yes, you have a democratic process. Yes, you have elected representatives. And yes, you can make speeches, but if we don’t like your speeches, we’ll punish you, public speaking democrat or no democrat. Mmmm.

Is there a lesson here? Yes, there is.

If you are a student, or any public speaking democrat, and planning to give a broadcast speech, get it cleared properly.

And if you aren’t a student and are planning to give a speech, get it cleared properly.

You can always discover plenty of public speaking skills tips with our regular series of suggestions and tips for speakers. And, with more than 100 top tips, there’s something here for every occasion. Plus, when you want to develop your own skills that bit further, then you’ll find a training course will do the trick. Because a well-timed training session can enhance both skills and confidence. So, when the time is right, please don’t hesitate to get in touch.