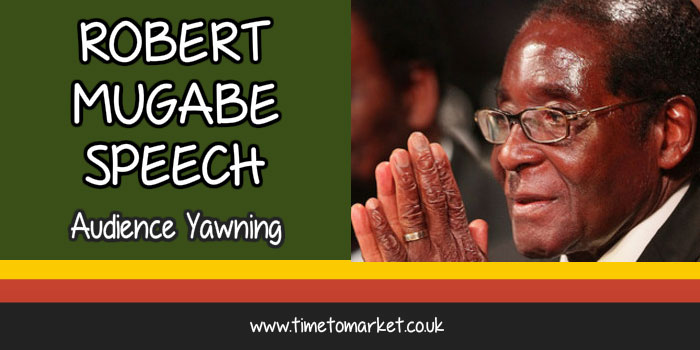 Zanu (PF) members who were at their 2010 annual conference this weekend in Mutare have become used to two hour speeches from their President. Sometimes they are even longer on special occasions. But on this occasion they didn’t hide their disappointment at being short-changed with their President’s public speaking. They were asleep. At first they yawned. Then, they yawned some more. And, finally, they fell asleep.

That is of course some impact. Just consider how a Robert Mugabe speech of 80 minutes can have such a devastating impact on his audience. Truly remarkable. Of course, we have seen other instances. The President Obama Kalamazoo speech resulted in a a member of his audience nodding off. But, that was only one audience member. Not several.

And the Zimbabwe President? How was he after this epic? He was alert and conscious at the end. But he appeared to lag somewhat as he approached his eventual conclusion.

That’s the problem with an 80 minute speech. It takes its toll on the speaker in addition to the audience.

You can read tips about the ideal presentation length or speech duration with the Telling It Straight presentation tips newsletter. Or, alternatively, when you want to really boost your public speaking skills why not consider some one to one coaching. Because a one-to-one public speaking coaching session will give you the skills and confidence your need for public speaking success. At work. At a conference. Or, perhaps at a seminar. It’s your choice. But, please don’t hesitate to get in touch.