A Senator Sanders speech has become an internet media sensation, with the veteran Senator now at the age of 69. His speech in the Senate on Friday became a rolling marathon, not just for its public speaking but also for its twitter updates. 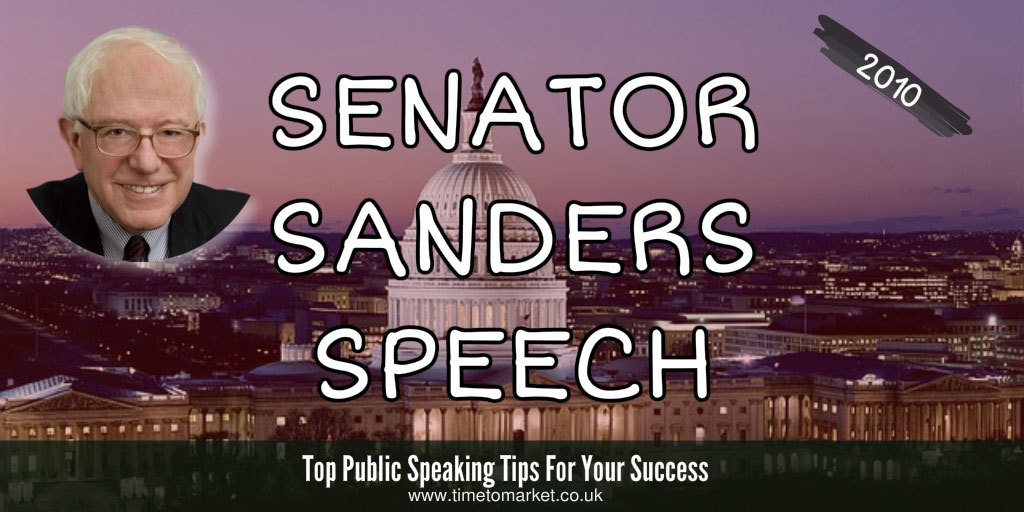 The independent Senator from Vermont took to the lectern at 1025 in the morning and finished his speech to bemused colleagues in the Senate nearly nine hours later. In business he wouldn’t have stood a chance. But in America’s Senate this is business. If not business as normal.

At the start of this Senator Sanders speech, we heard:

“I’m not here to set any great records, or to make a spectacle…”

But, he noted, he would speak as long as possible. That’s the essence of the filibuster.

It’s an internet sensation. But it’s not a record. That record sits with the late Senator Strom Thurmond. As Democrat Senator for South Carolina his 1957 speech in the Senate went on for 24 hours and 18 minutes. That’s right. A 24 hour speech!

Fortunately Senator Sanders is a long way from that record. For anyone who’s thinking of inflicting such public speaking agony on their audience here are some tips from Senator Sanders:

And one last thing. From my watching of this Senator Sanders speech, you can get used to your audience only listening to the odd 10 or 15 minutes of your speech. True.

Of course, you probably don’t want a reputation for lengthy speeches or as a long-winded speaker. But when you want some tips on how long should your speech be, then you’ll find them here. Because with more than 100 public speaking tips, podcasts and videos, there’s something for every speech occasion. Plus, when you need to hone your public speaking skills that bit further, then you can consider training. Because a well-timed public speaking course will always do wonders for skills and confidence. So, when the time is right, please don’t hesitate to get in touch.