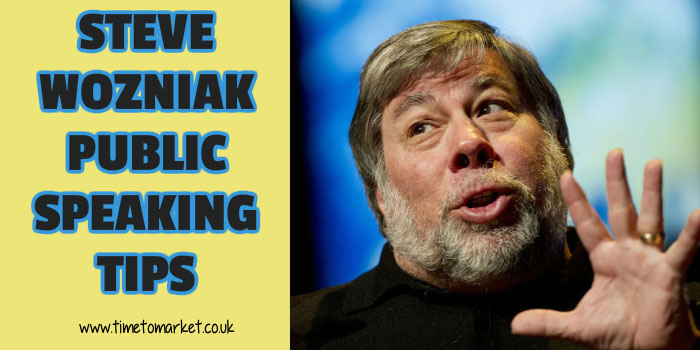 He’s in demand right now for speeches, keynotes and technology presentations. It would be churlish to suggest this has anything to do with the untimely death of Apple co-founder Steve Jobs.

Wozniak does indeed speak about the Apple early days. But he’s also sought after for speaking about his thoughts on mobile evolution, convergence, the cloud and the little matter of Government eavesdropping on the population.

The demand for his speeches continues apace. He’s just been announced as featured speaker at the 2014 Local Search Association Conference in Huntingdon Beach, California.

Boadly, his public speaking tips are:

You might well ask, why not? According to Steve…

That would not be creative!

But, he continues with:

That’s dangerous you might well note. But, according to Mr Wozniak, it’s:

And lastly, he noted:

I’m always telling the truth, even when it dispels myths.

It’s an amazing set of public speaking tips that we can all recognise. But, I’d caution against the “extemporaneous” public speaking style for us lesser mortals. There’s a lot more to the impromptu speech than meets the eye!

But the style works for Steve Wozniak who clearly lives and breathes his technology subject. Mr Wozniak, we salute you.

You can uncover more public speaking tips with the Telling It Straight newsletter from Time to Market. Alternatively, you can always join us on a public speaking skills course or coaching session. So, when the time is right, please don’t hesitate to get in touch.