Come the new year most Western leaders fall over themselves to deliver a New Year’s speech. But that’s not the case in North Korea where a New Year’s speech is a rarity. It’s true that calendar differences don’t help. But they are still rare. 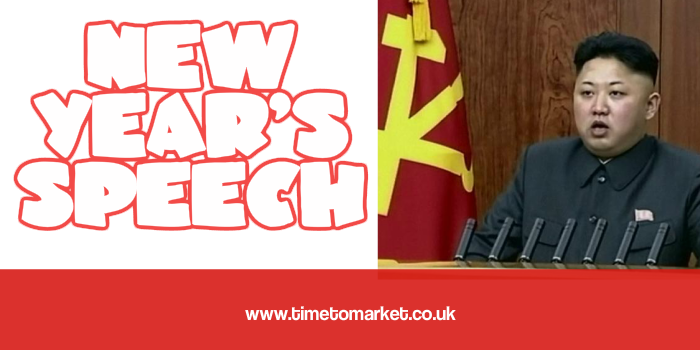 In fact the last leader’s New Year’s speech in North Korea was given by Kim Il-sung, the grandfather of today’s leader, in 1994.

So there must have been some consternation when the current leader Kim Jong-un chose to give a New Year’s speech on state television and radio. Was he about to announce something? Was there anything sinister to report?

Kim Jong-un gave his speech from a podium rich in revolutionary communist iconography. He appeared alert and vibrant, in stark contrast to the last few pronouncements made by his father who died in 2011.

Yes, he read from a prepared script at quite a pace. But, he didn’t pause much at all. In fact, pausing doesn’t appear to be a skill in the new leader’s armoury. He also rocks from side to side when speaking. Yes, he’s a rocker. Fortunately that’s largely masked by the enormous lectern that’s hiding him from too much attention.

His audience appeared appreciative giving him a noisy welcome of applause before he started his speech.

In his speech he called for better ties with South Korea and noted that history suggests continued confrontation leads to war. So, in that regard, there wasn’t much difference with the first Kim Jong-un speech last year. There we are. Happy New Year.

You can uncover all the secrets of a New Year’s speech with a one to one public speaking coaching session with Time to Market. Choose your own offices as a training venue or you can opt for one of our 40 training centres. It’s your choice. So, please don’t hesitate to get in touch.