This Emperor Akihito television speech to the Japanese people is unprecedented in modern times. Yes, his father Emperor Hirohito made a national radio address at the end of wartime hostilities in August 1945. But, since then the World’s oldest monarchy has kept itself to itself. Radio and television addresses are few and far between. And they certainly aren’t matters of national importance. They also aren’t in the spotlight. That lack of self-publicity is akin to the speechless dictator, Kim Jong-il. He never gave a speech in 18 years of rule. 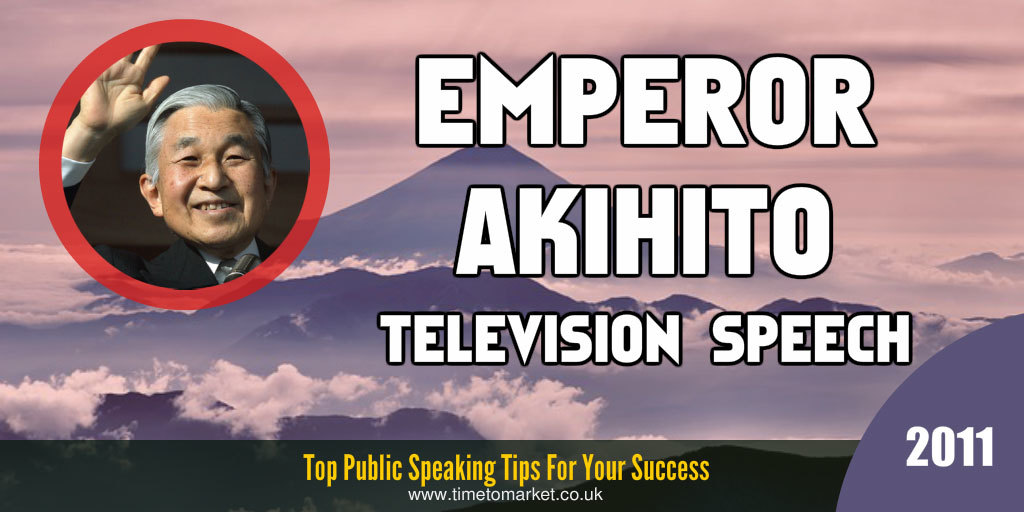 However, Japan itself is in the spotlight right now. A colossal earthquake. A monstrous tsunami and now a nuclear reactor disaster. What better time to have an Emperor Akihito television speech to the nation as Head of State?

His speech was short at about five minutes in length. We wonder if he sought advice on how long should your speech be?

But, making no concessions, his manner was courteous as he started his speech with a bow. And whilst his speech remained mannered, the language was more direct than many court watchers expected. There’s an expectation for the arcane and flowery language of the Imperial court. The 77-year old Emperor, however, spoke with far more directness to his television speech audience.

His speech must certainly have helped to bring hope to his nation. And indeed it would have inspired many to further titanic struggles with the devastation the country’s experienced.

If there’s a danger with the Emperor’s speech it has to be that the nuclear power station disaster could become political. If that’s the only danger facing the occupant of the Imperial Palace, then that’s a risk worth taking.

If the short speech is something to which you aspire, then why not take a look at all our public speaking tips. Because with more than a hundred tips, we are confident that we have a tip for every occasion. And, when you need some specialist public speaking help—training or coaching, then please don’t hesitate to get in touch.

Previous Post Sheffield Steeled For Clegg Spring Conference Speech Next Post To Speak, Or Not To Speak, That Is The Question