To Speak, Or Not To Speak, That Is The Question

The decision to cancel a public speech doesn’t always make the news. But when it’s the President of the United States cancelling a major public address? That’s news. I mean, why cancel a speech? 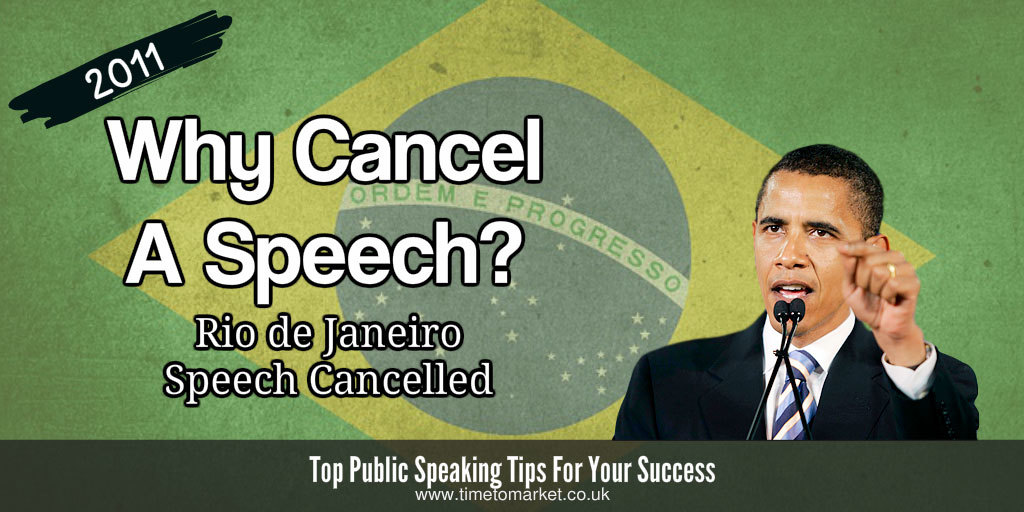 Why Cancel A Speech In Rio De Janeiro?

White House staff have cancelled a speech that the President had planned to give in a square in Rio de Janeiro on Sunday. The speech was originally planned to be given by Barack Obama in an historic square known as Cinelandia, right in the middle of the City.

But, now its been cancelled…and the suggestion is that he will make some remarks at the Rio Municipal Theatre instead. That’s not good news for the many people who had planned to listen to his speech. The theatre venue is comparatively very small and there’s the suggestion that his speech will be for an invited audience only.

Why Cancel A Speech In Rio De Janeiro?

The question is why cancel a speech? Security concerns are probably uppermost in the minds of anyone responsible for the President’s engagements…and on a foreign tour these must be more pressing. That’s particularly so, as the 2-day Brazil visit is followed by a trip to Chile and El Salvador. And then the President returns to Washington D.C.

But, it’s not so clear. So, why would you cancel a speech? Beyond security concerns you might have a question or two over audience safety or the dangers of crushing. Of course, there are other more sinister reasons. Because you only have to think about the Bulgarian conference speech that nearly ended in disaster. And, of course it was only a lengthy speech that saved former President Roosevelt from an assassin. Who knows? It’s pure speculation. But there are many disappointed Brazilians who won’t get to hear the President speak.

We clearly hope that you don’t need to cancel a speech. But, if you want some tips for your public speaking then you can always review our series of tips for speakers and presenters. And, with more than 100 top tips to choose from, there really is something here for everyone. Plus, when you want to give your public speaking skills a real boost then you’ll find that a training course is always a good option. So, when the time is right, please don’t hesitate to get in touch.