It’s undeniably the final moments in Tripoli for the regime of Colonel Gaddafi. But even as chaos and madness reigned supreme in the streets of the capital city, there’s a Muammar Gaddafi speech in the making. 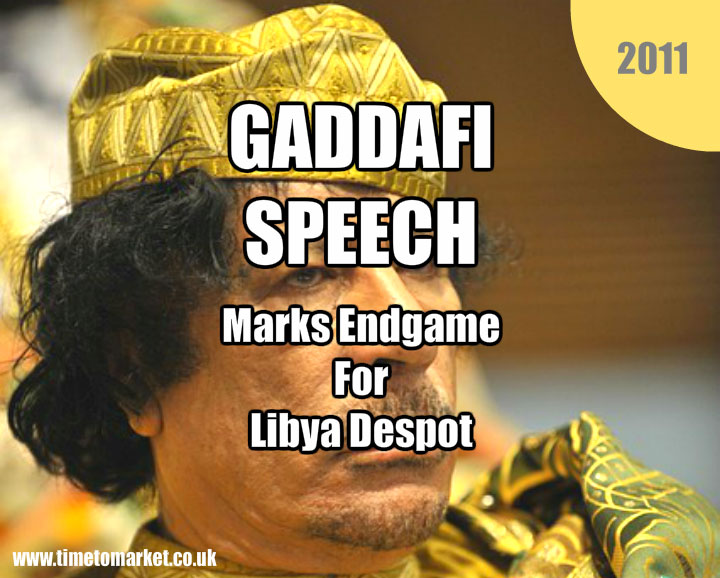 Gaddafi Speech Marks The Endgame For the Libyan Despot

It’s certainly a trait of some of the most despotic of rulers that the speech, presented via television or radio, is organised to settle their nations. It’s clear that his speech on 21st August did no such thing. Far from settling his nation it probably unsettled them even more…leaving a host of unanswered questions. Questions such as, “Have you already left?” And then his speech also contained such lines as:

This was certainly not a tour de force, but a bizarre tour de comedie, perhaps.

For example the Colonel Gaddafi speech treated his audience to:

The donkeys of the Gulf have given them weapons to bomb our air-conditioners.

Gaddafi Speech Rambles To A Close

A marvellous line that deserves to be preserved. But there was also some sense amid the rant as he explored the colonial past that is Libya’s, the Italian oppression and the British occupation…their revolution and their oil discoveries. Too late.

What are we, Palestinians? Somalis!

In all, this Gaddafi speech certainly earns its place in the pantheon of long-winded speakers.

However, there remain some deep reservations about both the clear will of NATO forces to dislodge Colonel Gaddafi and the tangled mess that is the revolutionary Council. But there will be few tears marking the loss to the world of this particular speech-making despot.