Former Premier Gordon Brown gave his first major speech since leaving 10 Downing Street in May this year. His speech followed a period of quiet and relative isolation for Mr Brown. But unlike his Scottish predecessor, Mr Livingstone, Gordon gave this Kampala speech at a meeting of African Leaders in Uganda. And his subject? He called for greater interdependence and unity between African nations. 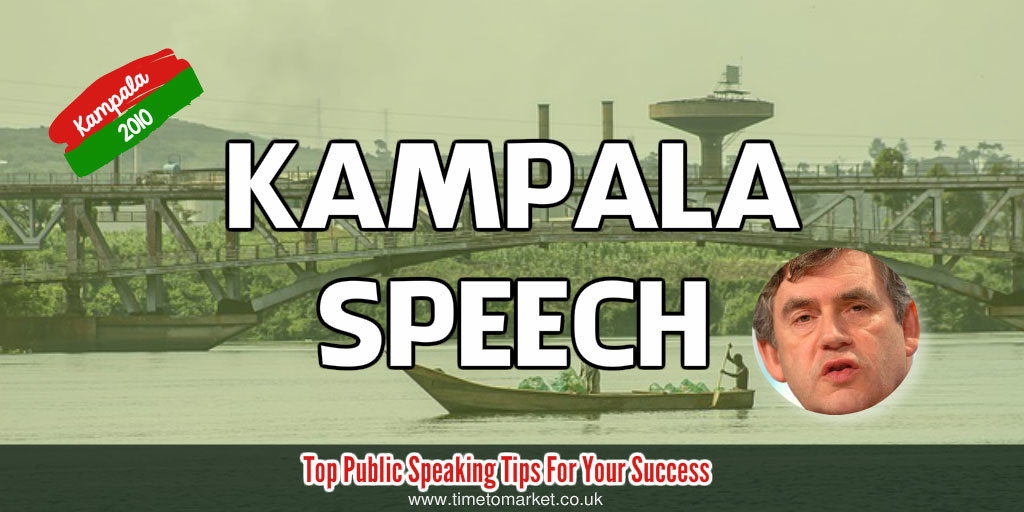 It wasn’t a classic Gordon Brown Kampala speech. But the craft of the speech writer was there for all to see.

Not A Classic Kampala Speech From Gordon

Not a classic? No, Gordon Brown is still prone to the lengthy sentence structure that characterised much of his work when he was Prime Minister:

“The only way out of this vicious spiral of less spending, slower growth and fewer jobs is for the G2O to agree a strategy for global growth which has as its goal increased world growth worth 3 trillion and 30 million jobs over the next three years, and has at its the idea that Africa is not the problem but a key part of the solution.”

But the Kampala speech had some nuggets. Early on it referenced the words of Rodgers and Hammerstein’s 1945 musical, Carousel:

“You will never walk alone.”

And that reference also bore a hint of the Martin Luther King speech at the Lincoln Memorial in 1963: “we cannot walk alone.”

More Than A Hint Of Martin Luther King

A coincidence? Possibly not. Gordon Brown then went on to say:

“instead we need to match the onward march.”

“As we walk, we must make the pledge that we shall always march ahead.”

Where Gordon Brown noted in his speech in Kampala:

“Even though Africa paid a high price for financial problems caused elsewhere, this is not the time to decouple Africa from the world economy, or to abandon market-based competition.”

“This is no time to engage in the luxury of cooling off or to take the tranquilizing drug of gradualism. Now is the time to make real the promises of democracy.”

It’s more than coincidence and shows the level of political insight needed to make big landmark speeches such as these.

Other traits of the political speech writer were also evident. There were position takers:

“Some people will say these balances are inevitable, that the world is out of kilter and there’s simply nothing you can do. But I believe there is an alternative.”

There was a neat phrase reversal:

And he also used the not this but that clause:

“The future is no longer giving and receiving, but instead investing together in a future which is shared.”

Despite the hints to that great speech writer Martin Luther King, this was no classic. Some lines were pure new Labour…horribly forgettable. Lines such as:

“As we unravel this we know the situation going forward is unsustainable.”

Neither classic, nor classy. But sufficiently well-written to make it very worthwhile. But you never know this Kampala speech might be useful to a Uganda speech writer?

You can always discover plenty of public speaking tips with our regular series of posts, podcasts and videos. And when you are ready to really give your public speaking skills a boost, then you’ll find that some training is just the tonic. So, when the time is right, please don’t hesitate to get in touch.