There aren’t many heavyweight politicians today who can begin a speech with a fairly staid quotation. But it’s the sort of beginning to a Michael Gove speech that we can expect from the scholarly Michael Gove, the Education Secretary.

Stanley Baldwin, the Conservative Prime Minister who won more elections than any other in history, was once asked what was the most significant thing that he had ever learned about politics…

So, in a speech to the Independent Academies Association (IAA) he used a story about Stanley Baldwin to introduce the subjects of knowledge and learning…and the lengths that some people go to disguise their learning. 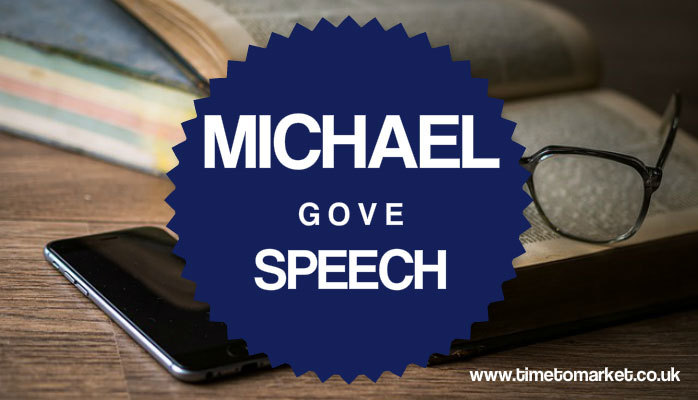 His speech contained some fine repetition of the phrase:

But this wasn’t just sanctimonious stuff. There was humour:

This bias against knowledge manifested itself most recently when the otherwise saintly inventor Sir James Dyson had a crack at people who want to go to university to learn French lesbian poetry rather than applying themselves to matters technical.

The speech again showed that Mr Gove has a real fondness for words:

It’s like professing a love of cookery – hymning the beauty of perfectly baked souffles or rhapsodising over richly unguent risottos – and then saying the most important thing about food is checking the calorie count in every mouthful. Isn’t an obsession with measurement the enemy of enjoyment, the desire to assess and examine the death of learning for its own sake?

Gove Speech Reaches For The Soundbite

Who else around the Cabinet table would attempt that? He’s also a politician whose speeches brim with sentences, not clauses devoid of verbs. And that’s especially important with an education speech. But even a Michael Gove speech aspires to a good soundbite:

His speech included some good word-pairing…a favoured technique of exquisite orators such as Ronald Reagan:

Humans are hard-wired to seek out challenges. And our self-belief grows as we clear challenges we once thought beyond us.

And on the subject of American Presidents, how about Michael Gove’s borrowing of a phrase from President George W. Bush? It can’t be that often that someone borrows from a George Dubya speech:

With external testing there is no opportunity for such bias – the soft bigotry of low expectations – and tests show ethnic minority students performing better.

So external tests are not only a way of levelling the playing field for children of all backgrounds they are a solvent of prejudice.

George W. Bush introduced “the soft bigotry of low expectations” in a position taker he made in a speech in 2000:

Some say it is unfair to hold disadvantaged children to rigorous standards. I say it is discrimination to require anything less–the soft bigotry of low expectations.

Seven Reasons For Exams According To Gove Speech

In terms of structure the Education Secretary had seven reasons to support exams. An odd choice of number. Far from memorable. He didn’t make much attempt to keep referring to the number of reasons…at times it was certainly hard to establish which reason he was discussing.

He kept his seventh and final reason for his conclusion:

And that was that, a convincing end to another fine Michael Gove speech.