Brings Election 2012 Contest To A Close

We sensed that Mitt Romney would have gone into Tuesday night’s election count with two speeches in his pocket. There’s always work for a good speechwriter at this time of year. And he has counted on the support of speech writer Peggy Noonan. As it turned out only one speech was needed. And that was his concession speech. 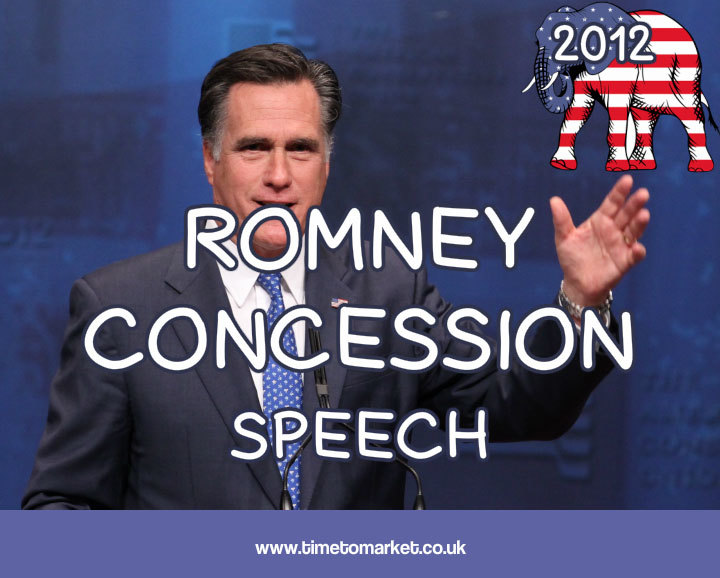 And some concession speech it proved to be. He spoke in Boston, Massachusetts where his speech took all of five minutes for him to deliver. Just five minutes to thank those who mean the most to him. And, of course those who helped with the campaign and, Paul Ryan who ran on the same ticket.

He appeared energised and comfortable as he spoke using autocue. His concession speech oozed courtesy and charm. It congratulated President Obama and wished his family well.

His speech focused on the tasks ahead using good imagery and some excellent repetition to secure the point:

The nation, as you know, is at a critical point. At a time like this, we can’t risk partisan bickering and political posturing. Our leaders have to reach across the aisle to do the people’s work. And we citizens also have to rise to the occasion. We look to our teachers and professors. We count on you not just to teach, but to inspire our children with a passion for learning and discovery.

We look to our pastors and priests and rabbis and counselors of all kinds to testify of the enduring principles upon which our society is built–honesty, charity, integrity and family. We look to our parents, for in the final analysis, everything depends on the success of our homes. We look to job creators of all kinds. We’re counting on you to invest, to hire, to step forward. And we look to Democrats and Republicans in government at all levels to put the people before the politics

The Matter Of Losing In A Concession Speech

And of course the concession speech dwelt on the thorny issue of losing:

Like so many of you, Paul and I have left everything on the field. We have given our all to this campaign. I so wish–I so wish that I had been able to fulfill your hopes to lead the country in a different direction. But the nation chose another leader. And so Ann and I join with you to earnestly pray for him and for this great nation.