How to admit it? Yes, we are really missing Nick Clegg. It's true that he wasn't everyone's cup of tea, but he could be relied on for a good speech every week or two. In his absence we are going to have to get used to his successor, Tim Farron the MP for Westmorland and Lonsdale, who has been in action with an INtogether speech. 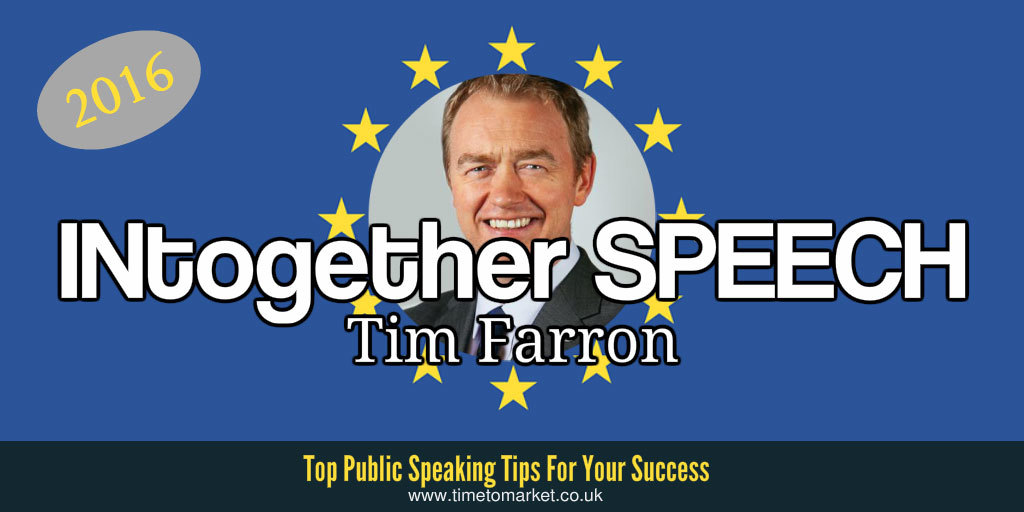 Mr Farron appears equally well-suited to public speaking. Could it be possible any other way? Perhaps not.

His INtogether speech on 11th May marked the start of the #INtogether campaign to keep the country within the European Union.

Much of the subject matter could have been Mr Clegg's. But the style? There are differences.

The big difference with his predecessor? He's fond of long sentences is Mr Farron.

The past wasn’t all that glorious, after all: it involved massive defence spending, national service, a succession of colonial conflicts in Malaya, Kenya, Cyprus and Borneo and – let’s be honest – the empire didn’t do that much for the sovereignty of those countries that we occupied…

We shouldn’t allow the Referendum to become a collective exorcism of our Brussels demons at the expense of a rational consideration of what is in the long-term best interest of our country and our people – and what role we want to play in the world.

But his speech had some nuggets.

As a movement, we want to look forward, not back. We are in the future business.

It sounds familiar, which is why it works.

INtogether...So Long As You Are One Of Us

Speaking of familiarity. There was the put-down on poor old Roger Daltrey of the Who. Roger had dared to speak up about leaving the EU the other day.

Not everyone gets it though. Yesterday, Roger Daltrey came out for Brexit. He had his reasons, I’m not going to slag him off. In the 60s he led the youthful mod revolution. He’s 72, a slip of a lad compared to my constituent. But Roger, we’re not talking about your generation. We’re not talking about mine either. The referendum is about the generations to come.

We should celebrate our diversity and the fact that Britain’s character and identity has been shaped by successive waves of immigration from the continent: Saxons, Danes, Normans, then later French Huguenots, Russian Jews, and in the turmoil of two world wars German and Austrian Jews, displaced Poles and Ukrainians, Italian prisoners-of-war who stayed here to work.

Over all, the speech brimmed with visions of future horizons, doing the right thing for future generations and helping others. The antithesis of self-serving politicians.

And that's probably why the Liberal Democrats don't quite get politics right now. "What's in it for me?" remains a very big question for most voters.

You can always discover new ways that you can use to prepare a speech when you join of our courses, organise some coaching or arrange a corporate training session for your team.