Not Lost For Words But No Speech Transcript From Hillary

It's a recurring theme. The theme of Hillary Clinton's speeches and what she gets paid for them. And it's a subject that we've discussed in an earlier post about the Hillary Clinton speeches. But now the big issue is there's no speech transcript from Hillary. 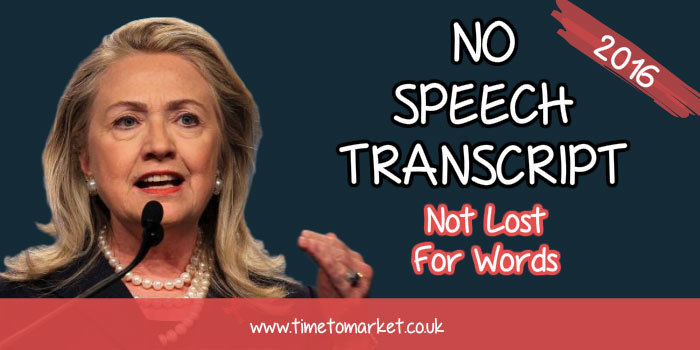 Certainly Not Lost For Words But No Speech Transcript

But we also started talking last year with some frequency about how many of her speeches were behind closed doors.

Beyond the public record. These were not limited to the Goldman Sachs speeches. There were others.

However, the clamour for transparency about the content of the Goldman Sachs speeches isn't dying down. Because it's getting noisier.

At the time we gave good explanations for why a speaker might choose a private public speaking engagement. It happens a lot. President George W. Bush employs similar arrangements for his public speaking.

The explanations for private public speaking include:

Both explanations seemed fair enough at the time. And, of course, they still do.

No Speech Transcript. Just Yet

What's different of course is that now Hillary Clinton is actively seeking public office with the Democrat party nomination.

And the problem? It's a puzzle. The Goldman Sachs speeches were made when she was a private citizen. Yes, she was undoubtedly building a war chest ready to make a run for the nomination and then for the Presidency.

But two things remain obvious. One, Hillary hadn't declared at the time. And two, most people who pay for a speech are looking for privacy. It's a private function that's being paid for with private funds. Exclusivity has a price. Respect it. So, no speech transcript.

Will the story go away? No. It's the nature of the beast that once the story is out there it's going to stick around. "Getting tough on Wall Street" might be another theme on this campaign trail, and so long as it is, there's much more fun to be had with this mischief for weeks and  months ahead. In the meantime, however, there's no speech transcript.

You can discover plenty of public speaking tips to help you with all your speeches and presentations. And, when you are ready to really give your public speaking skills a boost, then you can always consider training. Because a well-timed training course always does wonders. So, when the time is right, please don't hesitate to get in touch.