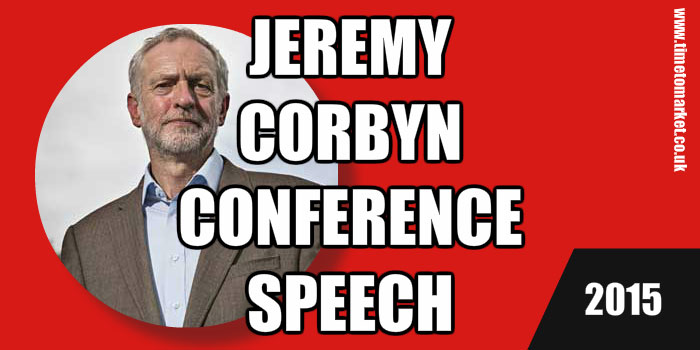 His speech style and tone is distinctly at odds with immediate previous Labour leaders. It is personal and it's his. We'll see whether it changes with time.

His introduction set the scene, quiet and unassuming, yet tough and obdurate. That appears to be a characteristic.

His sense of humour came through loud and clear as he referenced his starring role in media stories since his leadership election. If honesty and truthfulness were virtues in a politician, then this might just sound honest.

With his introductions completed the new leader set to with his leader's speech. We heard, as expected, a series of attacks on the Tories. Quite so. That's his job.

His rhetorical techniques are not those of legend. But his dramatic changes of pace and the gentle quiet tone he can affect at times are noteworthy. We'd expect that these will become his hallmarks in future speeches.

His speech did appear well-written, if slightly disorganised. It's become obvious in the last few hours that much of his speech could be attributed to the professional speech writer and political strategist, Richard Heller. In his blog Richard offered key sections of a speech for wider use. Apparently this was after his contributions were rejected by Ed Miliband.

I can't for the life of me see the problem with this. Mr. Heller or another speech writer? It was a choice made pressing by the two week gap between being elected leader and the Party conference. Many party leaders dedicate their summer recess to speech writing for conference. Mr Corbyn didn't have that luxury available to him.

The Art Of The Pause

Mr Corbyn is nowhere near fault-free with his set-piece speeches. We heard plenty of stumbles, but he masked them with immediate pauses. That's a great strategy when your enthusiasm for your words has you getting faster and faster.

We probably won't remember this Jeremy Corbyn conference speech in years to come. But more importantly, for everyone, this speech introduced the country to the new Labour leader. A new voice and a new style. And we will remember that, not least as we also consider a battling Len McCluskey speech.

When you need some help with your next conference speech, you can always organise a one-to-one coaching session to get you ready. You can call us when you are ready to discuss.