New Orleans five years after Hurricane Katrina was the subject of a speech by President Obama at the weekend. His New Orleans speech began with his customary recognition for local public servants: the Governor, Senators and Congressmen in addition to many more people with contributions to the New Orleans clean-up operation. It’s a very inclusive technique and it works well with his usually partisan audiences. 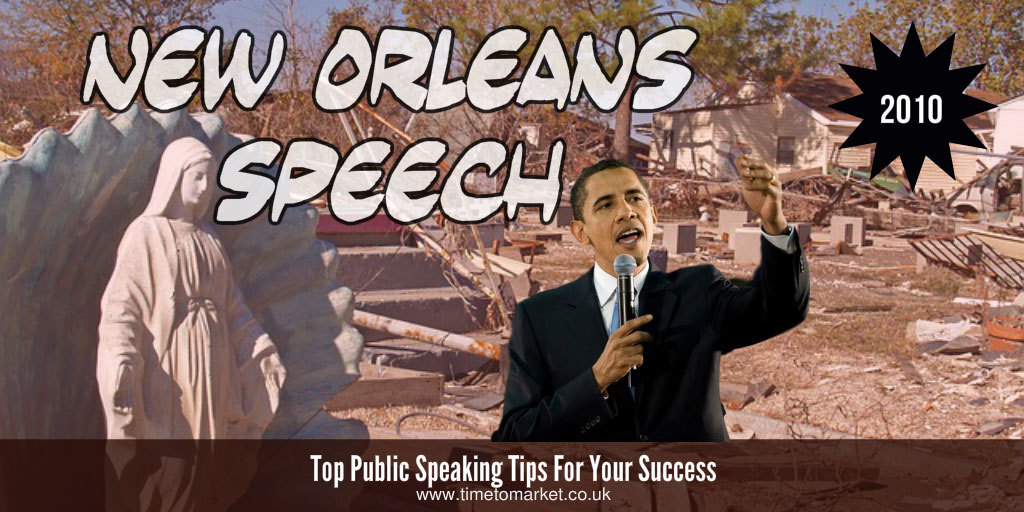 Story-telling featured strongly in this speech. Stories that described how the citizens of New Orleans persevered over the last five years. Stories of hope and resilience…not least the story of the Superbowl winners, the New Orleans Saints. This is, of course, a really sound technique. And it’s certainly true that we see a lot of this type of storytelling speech.

Repetition Techniques In This Speech

He used plenty of repetition in this New Orleans speech with a whole litany of “we see” sentences:

“And we see that here at Xavier…”

“We see the symbol that this city has become…”

“I’ve seen the sense of purpose…”

“We see the dedication…”

“And we see resilience and hope…”

There was humour at times. A reference to his earlier meal at the Parkway Bakery and Tavern noted that he hadn’t had the pudding just in case he fell asleep during his own speech. A nod perhaps to others who have taken to falling asleep in his speeches? Such as the unlucky student caught out in the President Obama Kalamazoo speech.

Not this but that clauses were also prominent near the end of his New Orleans speech:

“Ultimately, that must be the legacy of Katrina; not one of neglect, but of action; not one of indifference, but of empathy; not one of abandonment, but of a community working together to meet shared challenges.”

Conclusion To This New Orleans Speech

His conclusion fittingly referenced the greenery of New Orleans and the green shoots of recovery with a quote from the Book of Job:

“There is hope for a tree if it be cut down that it will sprout again, and that its tender branch will not cease.”

This was a much more energetic speech than the Howard Weil PowerPoint presentation also in New Orleans. So, a very fitting way to finish his New Orleans speech five years after Hurricane Katrina’s devastation.

You can always read more public speaking tips with our series of tips for speakers and presenters. And with more than 100 top tips from which to choose, there’s something for every occasion. Plus, when you want to grow your public speaking skills that bit further, then you can always train to be a better presenter. Because a well-constructed course will always pay dividends for your career success. So, when the time is right, please don’t hesitate to get in touch.