The art of creating a storytelling speech offers a variety of options for any speaker. Do you aim for a serious, educational story in your speech? Do you target an ethical dimension? Or, a story that cites an example or case study of best behaviour? You’ve got choices. 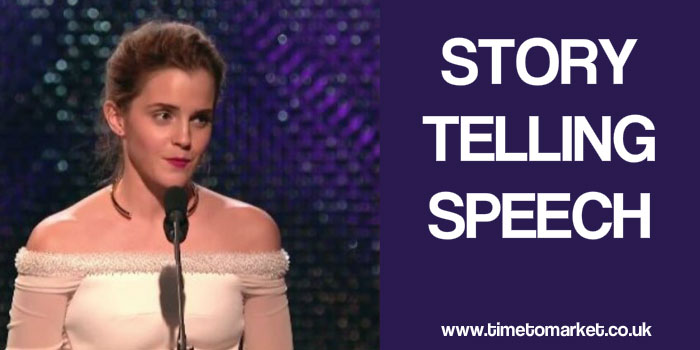 Emma Watson had those choices when she got to give a storytelling speech at the Britannia BAFTA Awards in Hollywood this month.  Her acceptance speech came after she was presented with the Britannia Award for British Artist of the Year.

She’s speech-ready just now, following her speech at the United Nations in September. So this occasion shouldn’t have proved overly-taxing. But there were nerves on the night. Her voice gives it away. But those nerves certainly didn’t impact either her performance or the delivery of her speech.

Her story concerned her feelings towards the family that is the British film making industry. With much of her childhood taken up with filming the Harry Potter film series, that’s something of which she’s very conscious. Her film making colleagues were very much a surrogate family.

Sentimentality could have got in the way here with tributes to everyone with whom Emma’s worked. But, no, she took just one small example of the film industry’s family feel to make her story work.

And that example was the death of her on-set hamster, Millie, while filming the first Harry Potter film.

But her story points to just about everyone’s experience of having a pet hamster when a child. They don’t survive long. At which stage a senior family member has to do the burial honours. That’s something that might be repeated several times over the years.

In Emma’s story that role was undertaken by the set decorators. They designed and built a mahogany, velvet lined coffin especially for Millie. Completed with a silver, engraved plaque, that was the perfect send-off for Millie the on-set hamster. So, a perfect example of the familial feel of the British film industry.

Rest in peace, Millie. This one’s for you

You can always discover more story telling examples such as the Ed Miliband mental health speech with our regular posts. And, of course, you can always uncover more storytelling speech techniques with a public speaking coaching session with Time to Market. Plan your one to one coaching day at one of more than 40 training centres. Or, you could choose your own offices. It’s your choice, so please don’t hesitate to get in touch.