This first George Osborne Budget speech as Chancellor of the Exchequer proved the rule. That’s because effective Budget speeches need to be well-written, well-delivered and to the point. But, this was billed as an emergency budget speech, as well. 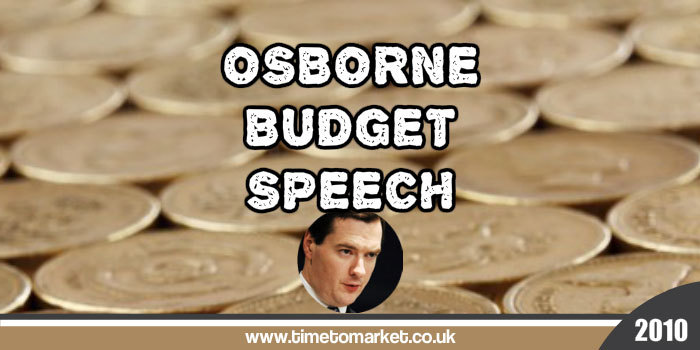 So, yes, this speech was well-written. And he delivered it well. And, even at an hour’s length, he kept to the point. So, he ticked all the main boxes. And, he definitely gave an emergency budget speech.

A Theme To This Osborne Budget Speech?

But was there a theme to it all? It began with:

“This is an emergency Budget”

And soon it became:

“This is the unavoidable Budget.”

And near the end it became:

“It is a progressive Budget.”

But in spite of an uncertainty over its own identity the speech made good use of rhetorical techniques.

“An economy where the state does not take…

An economy not overly reliant on…

An economy where prosperity is shared among all…”

Position Takers, that most stalwart of a politician’s rhetorical armoury also featured in this Osborne budget speech. So, for example:

“Governments in the past have said they were going to get to grips with welfare and reward work.

I might take issue with Osborne’s use of the word, “deliver,” since it’s vastly over-used and over-rated by all government departments. I suspect that his speech writer could take a longer dip into the thesaurus.

He managed to combine position takers with some good political digs that always make good listening:

“I am not going to hide hard choices from the British people or bury them in the small print of the Budget documents.

You’re going to hear them straight from me, here in this speech.”

Yes, some of his sentences were over lengthy. But there was some compensation with shorter, more pithy comments:

Fair and fairness were key words throughout his speech…perhaps these will be this Chancellor’s coinage in contrast to a predecessor’s, “prudence.”

This, not that clauses were also evident. For example:

“The country has overspent; it has not been under-taxed.”

Rather worryingly, that preceded a host of new tax measures! Such dissonance.

Facts And Figures In The Budget Speech

We typically expect numbers, figures and statistics in a budget speech. And we got them. But there was a difference. We might not believe everything the Chancellor had to say, but his figures are no longer being prepared by his own team. That’s because the Office for Budget Responsibility and the Bank of England now do that. If this move makes the Chancellor’s speeches more plausible, so be it.

Emergency budget or not, there was still scope for some humour in the speech:

“In recent years, Chancellors have been reluctant to explain what their total spending projections will mean for Whitehall departments. This is entirely self-defeating. It normally takes the Institute for Fiscal Studies less than 24 hours to work it out for themselves and let the public know the truth.

I will save them the effort.”

And he worked hard at simple and effective analysis for his wider audience that had a humorous edge:

“Total welfare spending has increased from £132 billion ten years ago to £192 billion today. That represents a real terms increase of a staggering 45 per cent.

It’s one reason why there is no money left.”

Conclusion To The Osborne Budget Speech

His speech conclusion used short and firm sentences to re-emphasise his main points, making a subtle juxtaposition between the past, the present and the future:

“Today we have paid the debts of a failed past.

And laid the foundations for a more prosperous future.”

Somehow, the Chancellor gave a lengthy but detailed budget speech that fitted the occasion.

You can discover plenty more public speaking tips with our regular series of tips for speakers. And, with more than 100 tips, podcasts and videos you will find something for every occasion. and, of course, when you want to develop your public speaking skills even further, then please don’t hesitate to get in touch.