In the midst of Europe’s financial turmoil Spain’s Prime Minister, Mariano Rajoy, used a televised speech in Madrid today to dissemble and defuse the story. This was not a rescue. This was not a bail-out. So, what was it then? Some Rajoy speech, some loan, you might think. 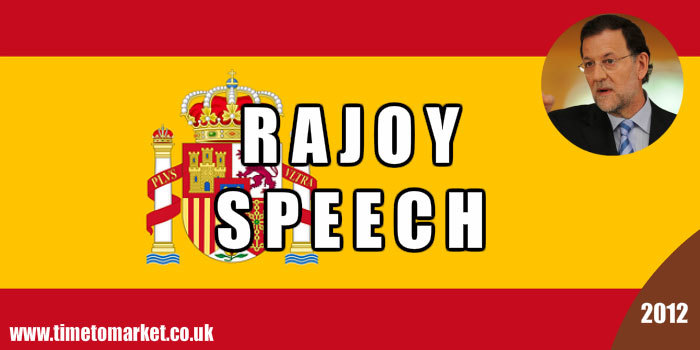 In his speech he patently refused to use certain key emotive words. He wouldn’t use the word, “rescue“, for example. However, everyone in Spain reckons that the Spanish economy was rescued on Saturday with a package of measures worth up to 100 billion Euros.

But in his speech the Prime Minister referred only to a soft loan. If only my bank manager was so obliging.

In a vociferous speech Señor Rajoy aimed for rhetoric and style. With some repetition he made his point:

Such was the scale of his success that after his speech he jetted off to Poland to watch his country play Italy in the European Championship 2012. A cool speaker.

There comes a time, however, when every speaker has to face a reality check. On this occasion, with this speech, the Spanish PM has missed that check.

His speech might well have pandered to the needs of the European bureaucracy in Brussels, Paris and Berlin. But it did little or nothing to calm the fears of his own population.

That has to be a priority for any speaker at times of national crisis…24% unemployment suggests crisis. And that’s one reason why this very aloof, distant and unnerving speech might prove to be Mariano Rajoy’s undoing.

You can always read a range of public speaking tips with the Time to Market catalogue of tips, hints and ideas. Available as posts, podcasts and training videos there’s something for every public speaker. And, when you feel it’s the right time to really boost your own public speaking skills, please don’t hesitate to contact us.