Speechless. That's how Amber Rudd, the former Home Secretary, must have felt last week after losing her speaking gig. Because she was "no platformed" just before a public speaking event in Oxford. In fact it was only 30 minutes before the UN Women Oxford event. Apparently the organisers, UN Women Oxford, had a committee meeting just before the event, voted and then canceled her speech. Speechless. 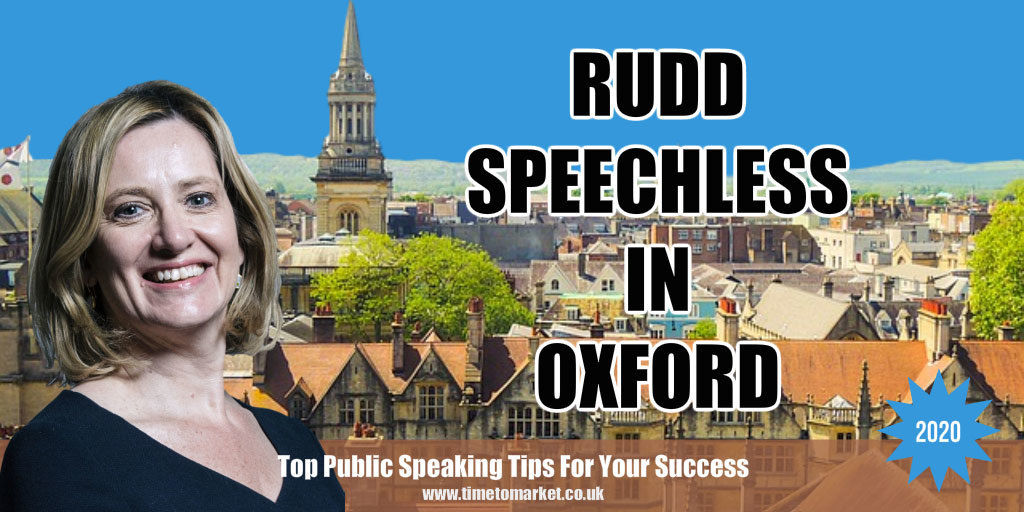 We are deeply sorry for all and any hurt caused to our members and other women and non-binary people in Oxford over this event.

Badly judged & rude of some students last night at Oxford to decide to “no platform” me 30 mins before an event I had been invited to for #IWD2020 to encourage young women into politics. They should stop hiding and start engaging. #FreeSpeech

It's certainly bizarre behaviour, particularly since a committee actually decided something. Yet, the more you discover about "no-platforming", it's actually quite common. Because it seems to happen a lot on British universities. Certainly they are fast becoming no-go zones for serious speakers with any real thought-provoking thoughts. And that has to be a problem for world-leading British universities.

Of course the Oxford Union maintains its own tradition of hosting some bizarre and exotic speech events such as this Sepp Blatter speech. Although their behaviour last year in the audience racism row did them no favours at all.

Typically, however, speakers are rarely left speechless. Since dealing with hecklers is something that you just have to get used to. And, with some practice you can cope with many other public speaking interruptions. So, any good organisation should allow a speech to go ahead without danger to the public. But, there's always an exception, such as this Hassan Khomeini speech in Iran which he speedily brought to a close. However, there's a literal and metaphorical gulf between Iran and Oxford.

Yes, heckling does morph into other protests. For example this Pakistan President's speech in Birmingham was disrupted by a shoe-thrower. A sole protester, apparently. And, elsewhere, a Hilary Clinton speech can usually attract some dissent. So, this example is a bit odd because the protester was silent and simply stood up during her speech at George Washington University. Of course, he was ejected from the auditorium by the University security detail, probably because she was Secretary of State at the time.

Whilst we urge the speechless Amber Rudd to have a platform to speak at Oxford University, there's some delicious irony here. Because as Home Secretary she banned the speeches and presence in the United Kingdom of Lauren Southern, Martin Sellner and Brittany Pettibone. Perhaps not the most delightful of speakers, but free speech remains free speech. It's a funny old world.

So, will the Oxford student who are responsible for no-platforming Amber Rudd actually face any consequences? Will there be any fall-out? Unusually perhaps, the University did make a comment.

Speechless Next Steps At Oxford

The university is strongly committed to freedom of speech and opposes no-platforming. We encourage our students to debate and engage with a range of views, and to treat others with the courtesy and dignity that they would expect themselves.

“We will be making the university’s position and feelings very clear to the event organisers and taking necessary steps to ensure that this cannot be repeated.”

So, there we are. Steps will be taken and the students must be quaking in their vegan boots. Or, not.

More likely is a gentle squeeze applied by government to one or other of the various funding streams enjoyed by Oxford. Put simply, either you enforce free speech or lose your government funding. That's the sort of simple choice that the most obdurate of Vice-Chancellors will heed.

You can always discover plenty of great public speaking tips so you are never left speechless at Oxford or anywhere else. And, when you are ready to take your own public speaking skills that bit further, then you can always ask us to train you. A one-day course or coaching session should certainly put everyone on the right track for success. So, when the time is right, please don't hesitate to get in touch.