Former Alaska Governor and Republican Vice-President Candidate Sarah Palin caught our attention this week. The occasion? The National Tea Party Convention in Nashville. Because this low-tax and minimum-State lobbying organisation hired Sarah Palin for its key-note speaker…at some considerable expense. So a tea party speech it is for Sarah Palin this time around. 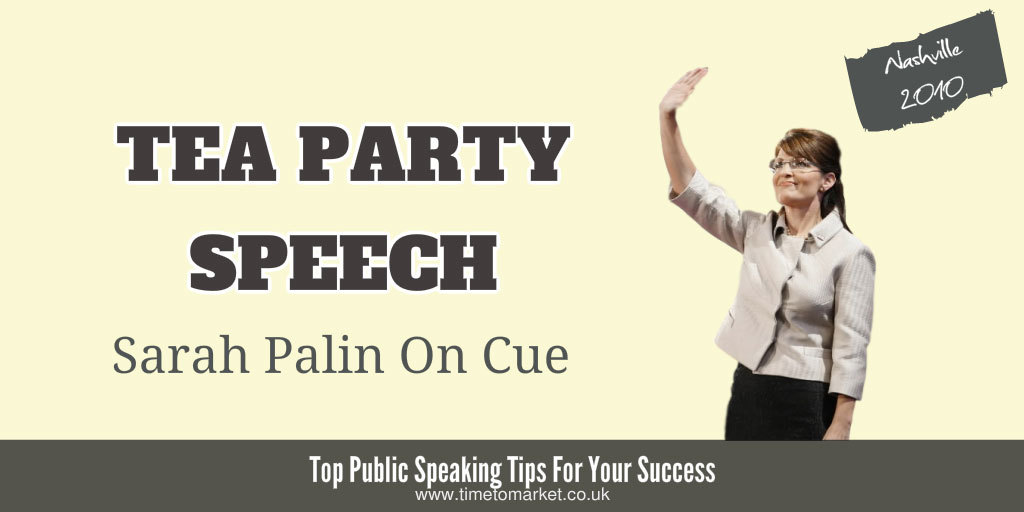 Yes, many of the Tea Party members balked at the price of tickets to attend the occasion. But they received the publicity that they would not otherwise have got from the world’s media. Quite a coup.

Sarah Palin’s speech was marked by two items. The first was her use of scribbled notes on her own hand…much like a builder taking down key measurements without paper to hand. Well, that was the state of her manicured hand: inky.

The notes in question?

There was another, “Budget Cuts,” but its place was taken by “Tax Cuts.”

It’s somewhat heartening to find that someone who aspires to the greatest office of state still depends on such a simple prompting device. Or was it, perhaps, part of her manicured blue-collar image? Whatever, it’s her best bet in case of a teleprompter freeze, perhaps?

That thought arose during the question and answer (Q&A) session that followed her tea party speech. Someone in the crowd asked Sarah Palin for her view on the top three things a Republican majority in Congress would focus on. The answer:

A planted question for a well-prepared speaker.

You can discover plenty of public speaking tips with our regular series of tips for speakers and presenters. And, with more than 100 top tips from which to choose, there’s something for every speaking event. Plus, when you are ready to develop your public speaking skills even further, then a training course should be the answer. So, when the time is right, please don’t hesitate to get in touch.