Inspiration isn’t usually scarce when it comes to Olympic events…particularly for the team from the host nation. So it’s noteworthy that a Dame Kelly Holmes speech is credited with inspiring the team GB football (soccer) team. So, can the Olympic double gold medal winner inspire the team? 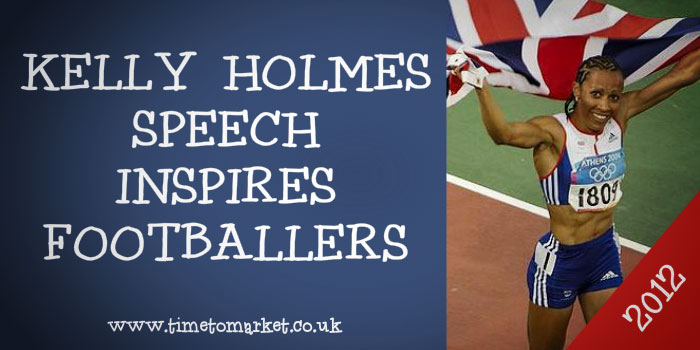 The fact is that the home nation football associations have co-operated with a GB football team in such a unique fashion to support London 2012. And it’s no surprise, with legacy in mind, that Dame Kelly Holmes has spoken to the team about the Olympic ideals.

Team members probably had no more idea of the Olympic movement’s meaning than a typical spectator. Some knowledge. But not exactly immersed in it all.

Her inspiring oration to the team before their first match against Senegal captured the essence of of the Olympic movement and what it means for an athlete to participate. Dai Greene captured that spirit in his GB team captain speech.

Her speech got the team to appreciate the significance of their participation. In terms of motivating the team, her speech came close to helping them secure a 1-0 victory. But it was not to be with the teams eventually drawing 1-1.

Still, if her speech resonated enough to encourage the team to beat the United Arab Emirates (UAE) 3-1 over the weekend then it’s worked marvels.

But you can also test other inspiring speech formats with a public speaking coaching session. Just organise a coaching session at your own offices or one of our 40 plus training centres. That means that you are never that far from your nearest training venue. Please don’t hesitate to call and find out more.