Motivating Speeches For The England Team

With hours to go before the first match starts in the FIFA World Cup 2010 the DVD rental business, LoveFilm, has announced the winners of a customer competition. It’s a competition to find the top ten motivating speeches from the movies of all time. 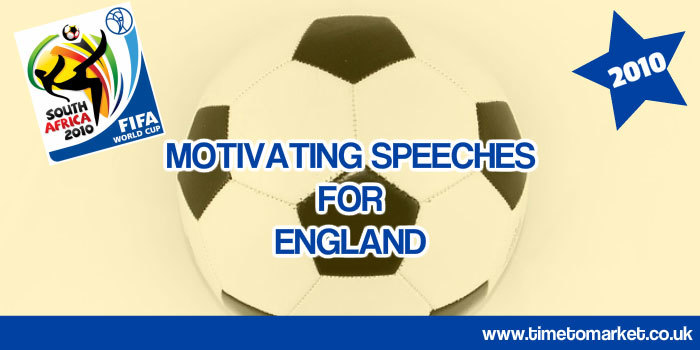 Motivating Speeches From The Movies For England 2010

According to their customers the top ten motivating speeches are:

LoveFilm has announced that it’s sent the England Football team manager, Fabio Capello, copies of each DVD. A good move. But I’m sure that Mr Capello has already worked through several drafts of his own motivating speeches!

Is this the right list? Probably for a modern UK or American audience it’s right. Because it’s certainly a modern list…with the oldest film being the 1985 movie, “The Goonies.”

Earlier in the month we reported how President Obama had given a world cup speech to the USA team. Perhaps he could have borrowed from a similar list?

So, when you need to give a motivating speech then you can always turn to our regular series of public speaking tips, podcasts and videos. And with more than a hundred top tips, there’s surely something for any motivational speech. And, of course, we come across all types!

But when you really want to hone your public speaking skills you should consider some training or coaching. Because that’s a tried and tested route to get the results that you need. Please don’t hesitate to get in touch when the time is right.