The David Cameron EU speech is receiving some serious attention, review and comment. And he hasn’t even given the speech yet. But that’s what happens when you build expectations in advance. 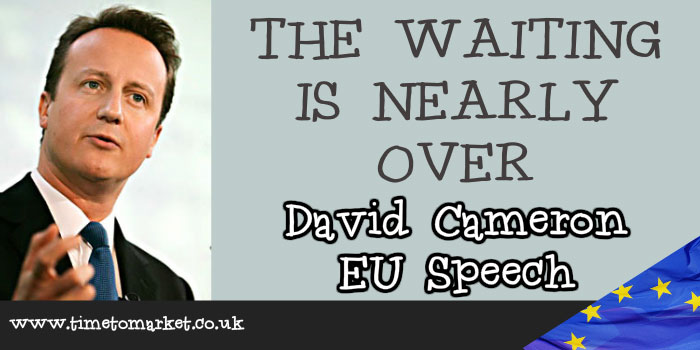 The Waiting Is Nearly Over For The David Cameron EU Speech

We understand that he has set the date for his EU speech for tomorrow. He has already written the speech and he has shared it with a number of the Prime Minister’s colleagues and senior Parliamentarians.

So, given its visibility, it’s not surprising therefore that some Cabinet members are already critical of the David Cameron EU speech in public. Clearly the speech wasn’t embargoed when Vince Cable or Ken Clarke read their copies.

That’s probably how it should be.

What is refreshing is that a Prime Minister’s speech should be eagerly anticipated…for its content. So often the contents of the Prime Minister’s speeches brim with rhetoric yet lack real substance. And there’s little chance that people will fall asleep in this David Cameron EU speech, unlike his Diwali speech.

It’s fair to say that before Mr Cameron speaks, this speech has more attention  than many other speeches get immediately after their delivery. Perhaps the Prime Minister really is on to something here? Oh, the anticipation.

When you are in the market for ideas for your next speech, don’t forget that a public speaking skills course might be just the tonic for you. A full day of public speaking exercises, tuition and insight will set you up for your big speech. Please don’t hesitate to get in touch for more details.