Free Speech For All Says Clegg in Civil Liberties Speech

The Deputy Prime Minister, Nick Clegg, gave a civil liberties speech at the Institute for Government in London last week. Reading from a prepared script he managed to maintain adequate eye contact with his audience for the 23 minutes of his speech. I had a sense that had he been more familiar with his material then his eye contact would have been better. 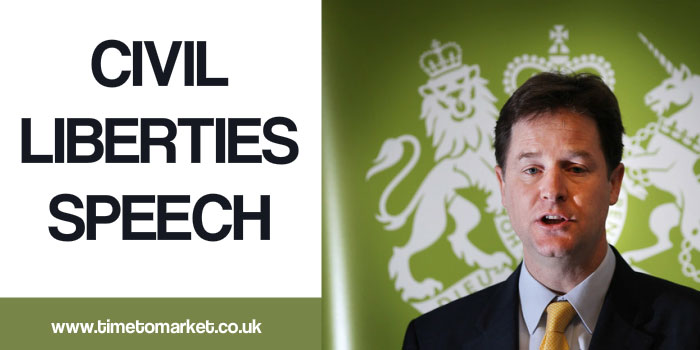 That’s because the speech included several word stumbles. But the Deputy Prime Minister kept going. He didn’t allow them to disrupt his flow. Of course, it’s just possible that the length of the sentences in this speech contributed to the stumbles.

Undeniably, his speech had structure and, he made it very obvious for his audience. Following his brief introduction he note that there were:

With the structure out of the way he then set the background for his audience. Then his speech followed the three main struts to his speech.

He used repetition well when describing the previous Government’s record on liberties:

“Ed Miliband has conceded that his Government seemed too casual about people’s freedom.

But there was nothing casual about…”

And he used a key phrase as a lead for a set of  position statements:

In fact “we believe” was a regular feature of his speech.

He used a rhetorical question on the tricky matter of civil liberties and the threat of terrorism:

“The question we must ask ourselves is this: are the tools we have to combat terrorism effective?”

He referenced colleagues including Francis Maude, Ken Clarke and Theresa May. Even a former Home Secretary got a good mention: John Reid. Referencing others is a good technique for many speakers working within a team or collegiate structure.

The closing minutes of his speech laid out a series of projects on which the government is working. This was a list and, indeed, sounded like a list. But is was bearable, before the speech’s summary.

Yes, the pointer was well-placed. Because his audience was in no doubt that they were on the final stretch. And that final stretch was worthwhile with:

This was a good speech from the Deputy Prime Minister who I sense would benefit from more time with his speech material before the event. Perhaps, he could snatch some speech practice, like David Cameron.

Of course, you can always find out more public speaking tips with a public speaking course from Time to Market. So, when you feel the time is right, please don’t hesitate to call us for more details.