Last week marked the 50th anniversary of John F Kennedy‘s Presidential Inauguration speech. It’s a speech with much to recommend it. Pace and tempo. Dramatic allusion and rhetorical flourish all delivered with a slightly Churchillian flourish. So, it’s really no surprise that we often come across his words repeated today, such as this State Senator’s speech. 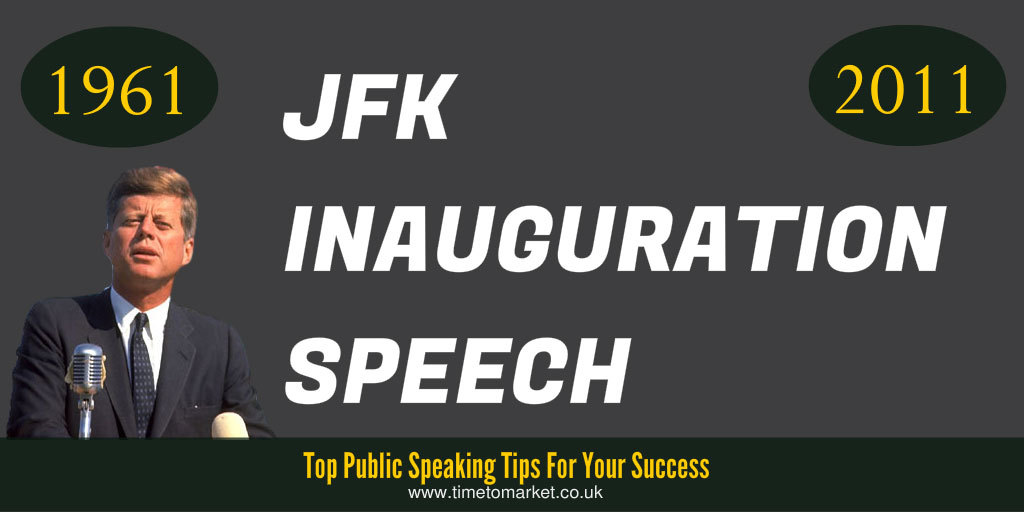 My fellow citizens of the world: Ask not what America will do for you, but what together we can do for the freedom of man.

and, referring to the USSR:

The JFK inauguration speech has references to the former USSR that clearly puts the speech in the context of 1961. Yes, he referenced civil rights, the economy and technology. But it was the relationship with the USSR plus war in Vietnam that was central to this presidential speech, prepared by the JFK speechwriter, Theodore Sorensen.

Within the inauguration speech, the President also used opposites with equally good measure:

“I do not shrink from this responsibility. I welcome it.”

They aren’t as notable as the earlier mentioned phrase reversals. But they are equally important for the 1961 JFK inauguration speech.

It remains a poignant speech, not least because of the images of both President and Mrs Kennedy being driven through throngs of supporters in an open-topped car. A scene that was so tragically familiar less than three years later in Dallas, Texas.

Of course, you can always discover more public speaking tips with our regular series of tips for speakers and presenters. So, whether you need some inspiration for an inauguration speech of your own or a classic conference speech then we’ve got that covered. Because with more than 100 tips from which to choose, there really is something for every occasion. Plus, when you need some specialist help with your public speaking skills, then you can always take up a public speaking skills session. That’s because some training is typically the fastest route to success. So, when you feel the time is right, please don’t hesitate to get in touch.