This Nick Clegg conference speech to his party faithful at the Liberal Democrats conference was well-received. And quite rightly so. It’s been sixty-five years since a Liberal addressed his party from a position of government. That’s some change. And, of course, a big thank you to the electorate. 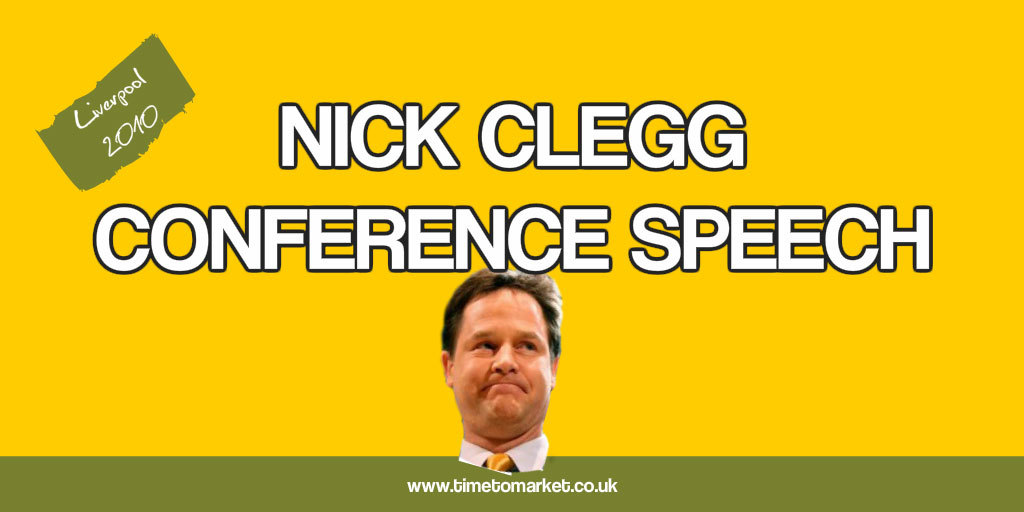 So, this Nick Clegg conference speech was all about change. Liberal Democrats changing things. Thus, he set out his purpose at the very beginning of this 40 minute speech:

“Two and a half years ago, I stood in this very hall to make my first speech as Leader of our party. I said that the chance for change was within our reach, and we had to seize it. That chance came. Perhaps not quite in the way many of us could have expected.”

A Listing Technique In This Nick Clegg Conference Speech

We’ve noted that you can easily find lists in a Nick Clegg speech. And, of course, this one at the party conference in Liverpool was no exception. Because there was a long list near the start of his speech; effectively a list of the coalition’s achievements since May 2010:

“Just think what we’ve done already. We’ve ended the injustice of the richest paying less tax on investments than the poorest do on their wages. We’ve guaranteed older people a decent increase in their pension…”

His enthusiasm for lists and repetition continued with another listing technique:

And later in his speech he applied the same combination of repetition and listing:

“We’ve always been the face of change. We are now the agents of change.”

His audience liked that one.

But beyond the rhetoric, the speech had to face up to the “cuts.” And it did so very neatly with a fine position taker and comparison:

“I’ve heard some people say that the cuts we are making are somehow taking Britain back to the 1980s, or the 1930s. Dismantling the state. It isn’t true. Even when all the cuts have happened, we will still be spending 41% of our national income – the same amount we were spending in 2006.”

A neat technique for this Nick Clegg conference speech.

He went further with good use of not this statements, another favourite technique:

“It’s not smaller government I believe in. It’s a different kind of government: a liberating government.”

The Grand Finale To This Conference Speech

Concluding his speech he returned to the familiar technique of repeating a choice phrase:

This was a very confident, comfortable performance from a speaker who’s clearly growing into the role of government.

You too can become a more comfortable and confident speaker with our series of public speaking tips, podcasts and videos. Because with more than 100 top tips for speakers from which to choose, there’s something for every speech. And, when you want to give your public speaking skills a real additional boost, then you can always consider some training. Since a training session will always give you results. So, when the time is right, please don’t hesitate to get in touch.