Happy, contented, with a full-time job, childcare and some degree of employment tenure, that’s the Prime Minister right now. And to prove it we had a David Cameron speech this week. In his speech he asks the Office for National Statistics to develop new measures for the reporting of our well-being! A happy David Cameron speech no less. 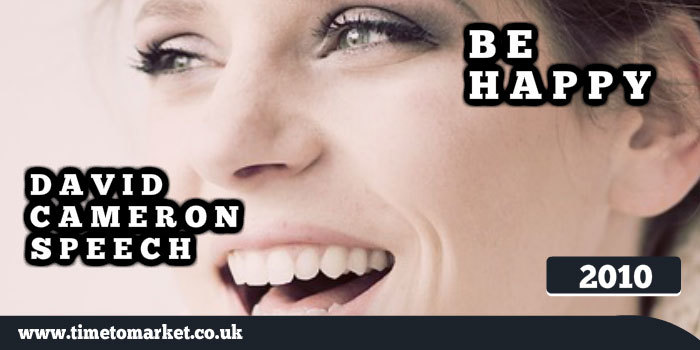 This was the gist of a much longer speech by David Cameron in London this morning. He spoke on the themes of well-being and happiness. These are familiar themes for the Prime Minister. Familiar and much-criticised. Criticised because most of the population sense it’s all hot air.

The Prime Minister knows it. So this David Cameron speech set out to tackle the objections to the new measurements. Before they are actually unveiled in April 2011.

Confident and self-assured the Prime Minister outlined his rationale for reporting well-being.

With a direct quotation from a Robert Kennedy speech he noted how economic growth doesn’t paint a complete picture of the nation’s health:

“GDP does not allow for the health of our children, the quality of their education, or the joy of their play”

“It measures neither our wisdom nor our learning; neither our compassion nor our devotion to our country; it measures everything, in short, except that which makes life worthwhile.”

But his speech took him to a different area. Because in that area we have the sense that David Cameron might not be as soft on all this as we suspect.

Dealing with the objections to measures of national well-being he noted, “there is the criticism that we cannot hope to improve people’s well-being–that this is beyond the realm of government.”

Rhetorical Repetition Always A Favourite In This David Cameron Speech

“Of course we already have strong instincts about what will improve people’s lives–and we’re acting on those instincts.

Our instinct that having the purpose of a job is as important to the soul as it is to the bank balance–it’s there in our hugely ambitious Work Programme to get people off welfare.

Our instinct that most people have a real yearning to belong to something bigger than themselves–it’s leading our plans to bring neighbourhoods together, to increase social action and build the Big Society.”

And that’s the thing. Because instinct tells the Prime Minister that it’s meddling, interfering government that upsets us the most. So, that really affects our well-being. Therefore, he reckons he’s right.

So the purpose of this rather odd speech? Build the qualitative evidence for small government. Simple.