Perhaps you had expected a typical Chancellor's speech from George Osborne this week? If so, then you might have been surprised with what you heard. For this was very much a leader in waiting speech. Yes, he did mention the economy. And he didn't forget to mention the deficit, unlike the Ed Miliband conference keynote speech. But for all that, this was still the speech of a party leader in waiting. 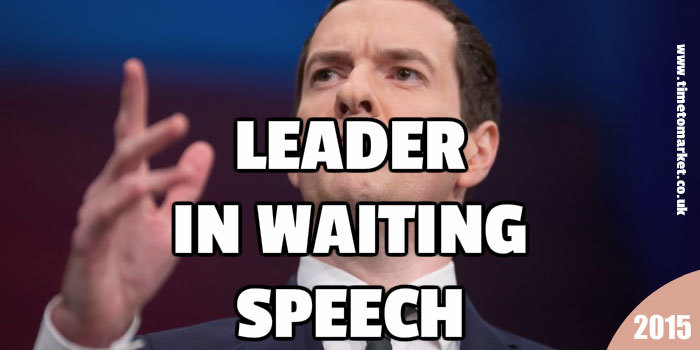 Mr Osborne's public speaking at these large set-piece events is much improved. Because there was a time when people wondered if he'd even appear on the podium and deliver his conference speech. Of course those were the days of "no conference speech" for George.

His appearance might not suggest good humour. But his introduction used humour to good effect.

If I’d told you twelve months ago that the Member of Parliament for Morley and Outwood was going to come onto this stage and speak in our economy debate you’d have called security.

Then, we listened to a few of the politician's favourite position takers during this leader in waiting speech:

My message to today’s Labour Party is this:
You head back to the 1980s. We’re heading forward.
You listen to the few. We’ll govern for the many.

These typically get a round of applause at conference.

However, his speech writing style is now firmly driven by short sentences. Sometimes, they are short non-sentences. For example:

The people open to the new thinking.
Ready to listen.
Admit where we get it wrong.
Accept when others have got it right.
The people with the plan for the future.

The main annoyance is his diction. Because he appears to be trying hard to lose his privileged, public school voice. Hence,

Oh, dear. What would the masters say at St. Paul's?

Slogans In This Leadership Speech

Then this leader in waiting speech also reminded us of Mr Osborne's fondness for slogans. And, while it's true that we didn't hear the term, "hard-working families", in this speech. We definitely heard "the Northern powerhouse" and we did recognise…

That was reminiscent of the 1979, "Labour isn't working" campaign.

Britain is getting a pay-rise.

Building the society we promised where we are all in this together.

and, of course, the old favourite…

And we’re going to go on fixing the roof while the sun is shining.
Part of fixing the roof is getting the British taxpayer out of owning great chunks of the banking system.

There was the odd stumble in this 30 minute speech. But he masked these well, with good pauses as he re-read the autocue. Good technique. His elocution is better with a stronger image and solid hand movement as he spoke. Again, very effective speaking.

A Leader's Image For This Speech

Image wise, his new rather svelte look and his Roman style haircut might suggest a Brutus in the Cameron camp, biding his time as leader in waiting. But we reckon his acknowledgement of his glorious leader in his introduction was sincere! What was less effective, however, was his mangling of,

The future favours the bold.

Ugh. Is this another sign that he wants to ditch his patrician, public school background, becoming a true plebeian?

What we wanted was the Roman-era quote, later seized by the Duke of Wellington.

"Fortune favours the brave" Terence, or was it Virgil?

As a conference speech this was effective. Whether it will be as effective as a leader in waiting speech, only time will tell.