When you are in the news it’s a matter of fact that your every word and movement is going to be reported on. And that’s especially true for the prospective Republican Presidential candidates. So a Governor Perry speech is typically newsworthy. But now, it’s even more so. And Governor Rick Perry discovered this the hard way during the second of the Grand Old Party television debates. 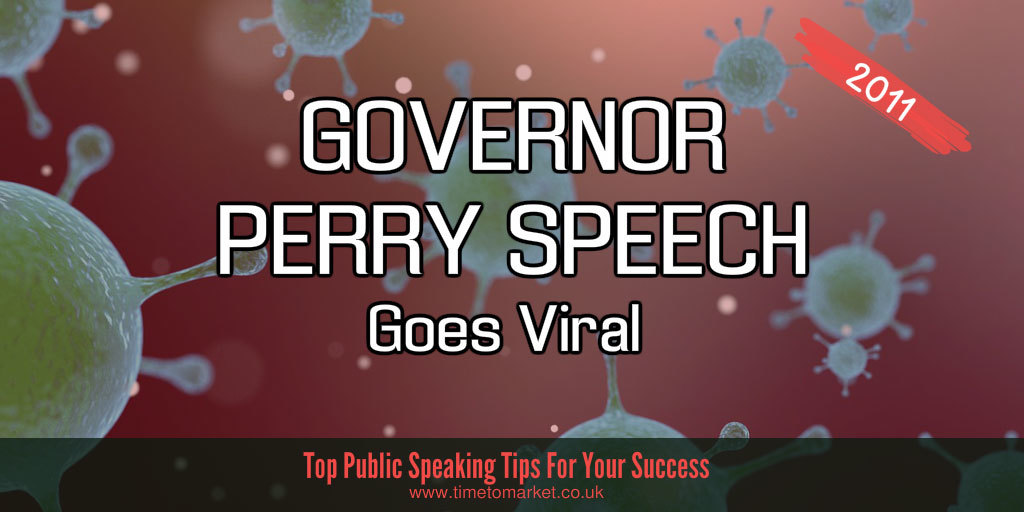 The standard stump Rick Perry speech, repeated on numerous occasions, involves him listing the three main federal government agencies that his administration would axe. But on Monday night he couldn’t remember the third agency on his list. That’s something that’s happened to every public speaker on at least one occasion. But for a Presidential prospect, it’s a near-death moment. Yes, he recovered. But despite some prompting from Ron Paul, his fellow candidate,  he couldn’t bring the name of the agency to his lips. So he said:

Tremendous. Unfortunately such is the attention that’s on him right now that questions are being asked about his over all ability to be President. So, if you are ever in the same position, it really pays to be prepared for public speaking problems. Or, you can always work hard to improve your memory before your speech.

And there’s also attention on another speech he gave in New Hampshire in October. This Governor Perry speech is now practically viral on the internet. It’s being commented on by all the tv shows and it’s been lampooned by Saturday Night Live.

As a speaker at this Cornerstone conservative grouping he’s definitely animated. His speech is certainly passionate…and perhaps his gestures are wild. But his words and his flow do follow. There is a sense and a logic to the words. But is he tired and emotional? You decide. Others certainly will.

You can discover more than 100 public speaking tips with our regular series of tips for speakers, podcasts and videos. And when you want to give your public speaking skills an added boost, then you can always consider some training. Because a well-organised training course is probably the best cure for public speaking anxiety. So, when the time is right, please don’t hesitate to get in touch.