Be Prepared For Public Speaking Problems

When You Give Your Conference Speech

No doubt you've heard enough speeches to know that you should be fully prepared before a speech. That's why we write out our speeches beforehand, practise those speeches and prepare for the conference venue itself. But, still it can all go horribly wrong. Because public speaking problems do happen. Therefore you want to be prepared and avoid a public speaking nightmare. 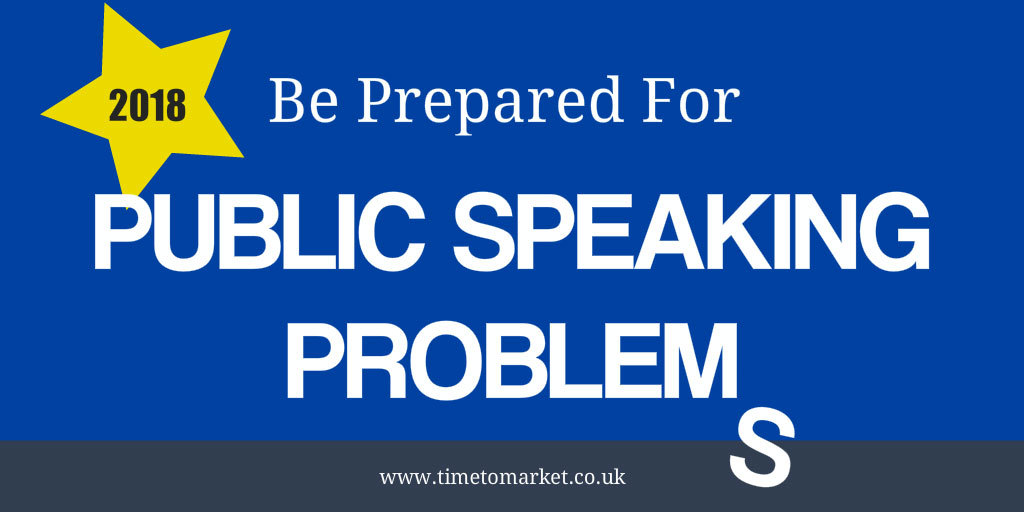 Aim To Be Prepared For Public Speaking Problems At Your Conference

Now, as the Conservatives head to their 2018 conference, we won't  mention you forgetting your lines. Because you are prepared. You have a script. You have cue cards. Or, perhaps you have a PowerPoint presentation to help you stay on track. And, of course you know the venue and your timings. Your aren't about to replicate a Baroness Scotland speech and arrive late. Nor is a fear of public speaking about to put you off. Unlike the late Rob Ford, Mayor of Toronto. No way.

But what happens if the autocue fails? Because it can do as we found with this Nintendo presentation. So, in this situation, keep cool. Tell a story or expand on a theme as you wait for the autocue to reset. And that's why autocue practice is essential. However, most autocue problems are problems of readability. You can't read the autocue from the podium…perhaps, because of a lighting issue? Or, maybe you forgot your glasses? Nelson Mandela famously had to borrow Winnie Mandela's spectacles to read his speech on his final release from prison in South Africa. Yes, this Nelson Mandela speech was rescued by a pair of borrowed glasses.

Remember to practise your timings when you practise your speech. So, consider both your own speaking pace and also your breathing. But also consider how your audience will react. will they laugh? Will they  be momentarily puzzled? For example, Donald Trump discovered an unexpected audience reaction at the United Nations this week.

Now we aren't really sure why he got laughter at this stage of his speech. But, the President handled it well in the situation.

Elsewhere, at the Labour party conference in Liverpool, Sir Keir Starmer also came across an unexpected audience reaction. They gave him a standing ovation before he'd finished. And he certainly didn't expect that.

Equally masterful was this Secretary Clinton speech. Hillary's speech at George Washington University was interrupted by a silent protester who turned his back on the speaker, but kept quiet. He was unceremoniously thrown out of the conference room. But it wasn't that clear whether Hillary had kept her cool or, been blissfully ignorant of the silent disturbance.

Theresa May came across a protester at the Conservative conference last year. He purported to be a comedic prankster. But that's debatable. In the event she kept calm in what could have proved a very dangerous situation. But, of course, it all added to the Theresa May conference speech nightmare.

It's highly unusual, but we know of more than one speaker who was assaulted on the podium. The speaker behind this Bulgarian conference speech very nearly came a total cropper. But, fortunately he survived. And so too did his assailant. Unfortunately, Malcolm X fared less well at the Audubon Ballroom, New York where he was assassinated mid-speech. And, more recently Fritz von Weizsäcker, the youngest son of a former German President,  was stabbed to death mid-sentence as he gave a medical lecture on liver fat. Horrible.

Shoe Throwing Problems In Your Audience

A thrown shoe can also prove disruptive if you are the speaker on the podium. Memorably George W. Bush was on the receiving end of a thrown shoe when in Iraq. And this Pakistan President speech in Birmingham was also disrupted by a shoe throwing incident. A sole protester, apparently.

Stage elements can fail or fall out of position when you least expect them. Now we might remember that Theresa May famously ignored her backdrop falling to bits during her conference speech last year. That's not a bad response. But, in truth, I don't think that the Prime Minister could see or hear the scenery collapse.

Of course President Obama did hear the noise as his Presidential seal fell to the ground mid-speech. And his response was classic courtesy.

“All of you know who I am. They’re sweating bullets back there.”

And, of course he got back on track with an audible signal to his autocue operator.

One danger that you might overlook is a sleeping audience. Because why should you anticipate that? Unfortunately it does happen…audiences do sleep. Your job is to be brief with your words, be energised and exciting in your delivery.

Be Prepared For Public Speaking Problems

So the range of public speaking problems that you might face is wide-ranging. And we haven't even touched on medical emergencies. This Joe Biden speech in Louisville, Kentucky nearly ended in tears when a member of his audience keeled over. Thankfully, it wasn't fatal.

And, if you depend on WiFi for your speech or presentation, then you should also be prepared. This iPhone 4 presentation with Steve Jobs was rescued after a WiFi failure.

But, whatever happens, do make sure of your time keeping. You don't want to be late for your conference speech, like this President Jonathan speech at the 50th anniversary of the African Union.

Yes, practise your speech. Rehearse all your lines and material. But also, be prepared. Expect the unexpected. Because it can happen. And your audience will look to you for calm and considered leadership when it does. Strong and stable leadership, perhaps? Good luck.

Please don't hesitate to get in touch when the time is right.