Mr Bean he’s not. A witty, engaging and provocative Rowan Atkinson speech by the former “Not The 9 O’Clock News” comedian helped to launch the “Feel Free to Insult Me” campaign yesterday at a reception in Parliament. 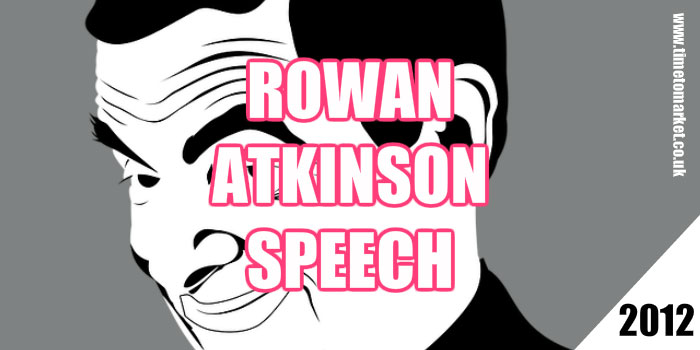 The new campaign sets out to reform section 5 of the Public Order Act which seems to afford criminal status to anyone judged by the Police to have given insult. So clear, so far?

Of course, Rowan Atkinson is no stranger to this subject. Because he’s campaigned vigorously over many years for more tolerance and less authoritarianism. More or less!

His speech began with his setting freedom of speech in a personal ranking. So that’s just behind access to food and sustenance and just ahead of shelter and abode. It’s important.

But the introduction to his speech then went further and noted that his own public profile probably meant that he would never fear arrest for giving insult through speech.

And it went further still with a series of examples. They involved people with less-exalted public profiles, where speech had resulted in imprisonment and fines. Quite bizarre heavy-handed policing in all the instances described.

So he’s clearly no stranger to public speaking. That much is obvious. Reading from a prepared script Mr Atkinson delivered his speech in a measured manner with some superb intonation. Because it’s all in the voice with Rowan Atkinson’s comic characters. And this was certainly the case with yesterday’s Rowan Atkinson speech. However, this wasn’t a joke.

He used a Not the 9 O’Clock News sketch, from many years ago, to good effect. He compared a comic situation with the ludicrous real life case of a police service that arrests and charges a young man for saying “woof” to a Labrador dog. You couldn’t make it up.

His speech included some fine rhetorical questions that moved things along:

But what about the thousands of other cases that did not enjoy the oxygen of publicity, that were not quite ludicrous enough to attract media attention?

His speech outline how the criminalisation of insult within Section 5 of the Public Order Act had made criticism, ridicule, sarcasm, unfavourable comparison and stating an alternative view to the orthodox very dangerous activities indeed.

The strongest weapon against the most hateful speech is not repression, it is more speech.

The crux of his argument was reached with:

Words matter to Rowan Atkinson and he treated his audience to some superb alliteration in the speech:

The repeal of this word in this clause will be only a small step but it will, I hope, be a critical one in a long term project to pause and slowly re-wind the creeping culture of censoriousness.

His final reference to Salman Rushdie’s concept of the “outrage industry” was both topical and appropriate.

This was a defining speech that set out to tackle the new intolerance. An intolerance that’s both authoritarian and controlling in nature. The campaign should prove entertaining and will no doubt be effective.

You can always discover more tips for public speakers from Time to Market. But you can also speak to us about public speaking training for your team. So, when you are ready for a new marketing campaign and need to use conference speeches or presentations, you’ll be ready. Please don’t hesitate to get in touch when the time is right.