The annual MacTaggart lecture is often the highlight of the Edinburgh International Television Festival. Not least because the occasion is used by speakers to lambast the BBC. Certainly that was the case last year when James Murdoch of Sky was the speaker. This year’s speaker, Mark Thompson, the BBC Director General, took the opportunity to put things right and bash Sky with this BBC MacTaggart speech. 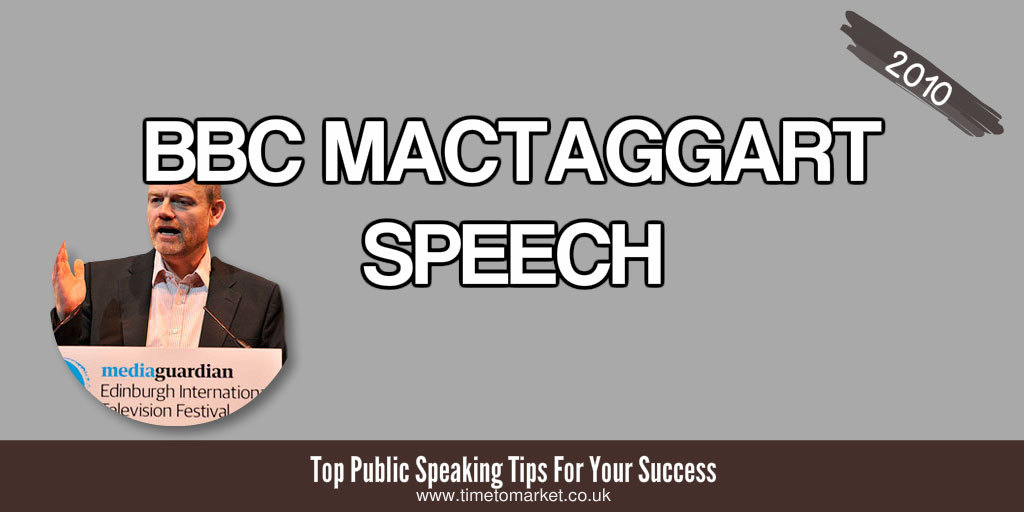 This was a long speech by Thompson. Just like the BBC that he heads, he’s not short of material; much of it repeats. Perhaps he might consider how long should your speech be. His approach, therefore, was to rush his way through his content speaking at a great pace. The result? Many of his words were less than clear. He lost grip of many points and he also faltered with his arguments as he rattled his way through this BBC MacTaggart speech.

Of course his reading mistakes were few. But his fast pace meant that his eyes typically looked at his script as he read the script aloud. He couldn’t look at his audience as he made each point. He could use autocue next time. But, he will need to make time for much-needed autocue practice.

I sensed that his speech would have been better with some editing. At 8,000 words this was a blockbuster of a speech. A BBC editor could have been commissioned to extract the nuggets and present a more worthwhile…and shorter whole.

You can discover plenty of public speaking tips with our regular series of tips for speakers and presenters. And with more than 100 top tips there are lots of ideas for your next speech. Plus, when you need to give your public speaking skills that extra boost then you can always consider some training. Because training or coaching is a ready way to develop your own public speaking skills and confidence. So, when the time is right, please don’t hesitate to get in touch.