It's fair to say that we haven't covered many of Joe Biden's speeches in the past. Yes, it's true that as Vice President, he did make a series of speeches, But with a President Obama more than capable in the speech department, it was always difficult to shine. However, he did feature when he gave a speech at the signing of the Patient Protection and Affordable Care Act in 2010. And that was commendable. We also featured one of his speeches that nearly bit the dust as a medical emergency unfolded. And of course, we featured him during the 2011 Obama budget speech, when the Vice President appeared to fall asleep. So, what should we make of this first Biden foreign policy speech? 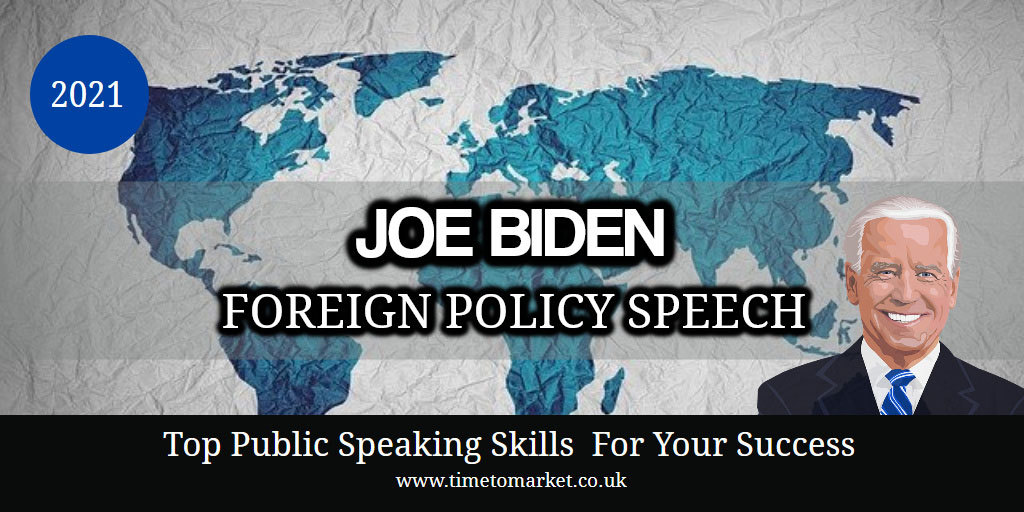 Well it wasn't too exciting as a foreign policy speech. But then, it wasn't challenging, either. To be fair, however, he really only needed to draw attention to the fact that he wasn't President Trump. He did that. The world can expect a different tone.

Investing in our diplomacy isn’t something we do just because it’s the right thing to do for the world … We do it because it’s in our naked self-interest.

Eloquence Matters In A President's Speech

It's certainly a bit more eloquent than his immediate predecessor. But is it greatly different? No doubt we'll see.

His beginning was nearly lost, as he turned aside and looked at his Secretary of State and mumbled. Of course he's not the first public speaker to do this. However we do hope that the production team can sort out an improved microphone set-up for him..

Of course this speech will look antiquated in no time because of the mask choreography, that occurred at the beginning of the speech, and indeed at the end of the Biden foreign policy speech. This really is quite a charade now.

So what about the speech? Well…

This really was the highlight and also the theme of the speech.

The President manages to use autocue (teleprompt) very well, although he's a bit intense on the central viewer. Should this be a positive for a President? Probably not. But we do know that President Trump had a lot of learning with autocue. Because it always pays to practise before you read your autocue.

But there were some misspeaks where perhaps his eyesight isn't too great. Or perhaps he is reading too fast. For example, we heard him struggle with...

President Biden is very fond of listing techniques in his speech. This is certainly a feature of the British political speech, such as the Nick Clegg conference speech of 2010. Can we expect more of the same from the new President?

Also in a similar fashion we noted his non-sentences technique. That again is very reminiscent of British political speeches.

And we’ll also take on directly the challenges posed by our prosperity, security, and democratic values by our most serious competitor, China.

Low Key Animation Is The Key

This foreign policy speech wasn't marked by animation. He keeps very, very rigid. Yes, there is some expansive hand movement, but not a great deal. To be fair, though, you can't be that animated behind a Presidential lectern. Although President Obama did try the same when he lost the Presidential seal during a speech in Washington.

Towards the end, we're expecting a peroration, but it didn't appear. The closest he got was a reference to a climate challenge, followed by a brief coughing spate. As he sounded hoarser and hoarser, the President drew his foreign policy speech to a close.

And that was it. He was off. And the charade of the masks continued, albeit the President left his own mask on the lectern.

You can always find plenty of public speaking tips with Time to Market to get you ready for your next leadership speech. And, when you are ready to take things to that higher level, please don't hesitate to get in touch about public speaking training.