First things first. We’re really pleased to see that we’ve got conferences back again–albeit they’re mainly political party conferences at this stage. But, it’s a start. So, when we pondered an Ed Davey conference speech we were enthusiastic. And his fellow Liberal Democrat conference goers might have been equally enthusiastic…until it dawned on everyone that the LibDems conference was mainly virtual this year. 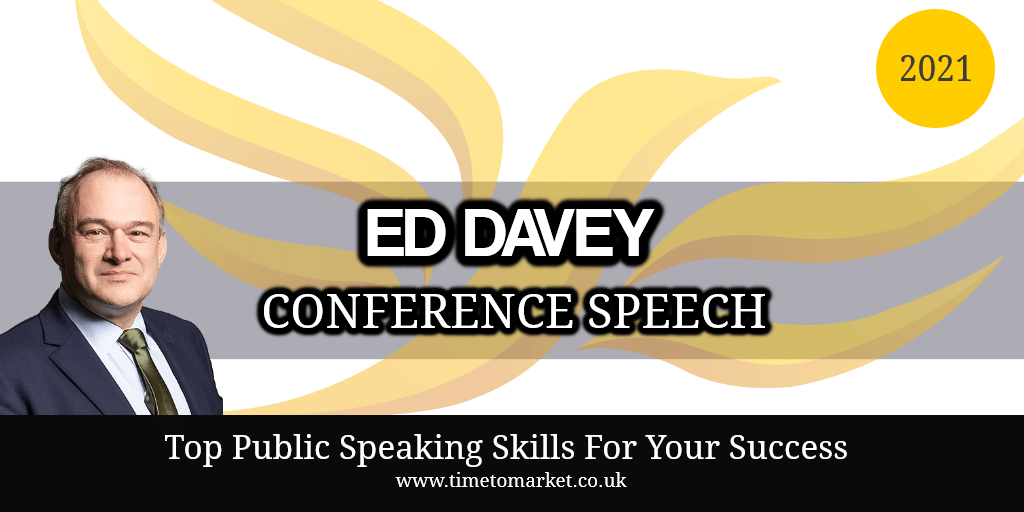 We’ve covered Ed’s speeches before. With one notable exception, an energy speech to a CBI audience, his speeches are more than competent. And that’s to be expected.

In Canary Wharf he managed to read his autocue (teleprompter) without difficulty. So, he hit all the key points you’d expect of a party leader desperately trying to make his political party relevant again.

The global tech giants and big property developers. The fossil fuel companies and the investment banks.

We all have to play by the rules, and do what’s right – so why don’t they?

People are sick and tired of the Conservatives making the powerful even more powerful – rigging the game for their friends.

However, it was his pre-speech publicity on twitter that really caught our attention. And that’s no bad thing in today’s news cycle.

Shirt ironedLooking forward to speaking to Liberal Democrat conference at 3pm. You can watch at https://t.co/zKmsCeltSF pic.twitter.com/J7GlEwwLGP

Yes, people ridiculed the fact that Ed was ironing a new shirt whilst wearing a shirt and tie. He had them in creases. But, hey that’s no big deal. We approve.

Because when you want to give a big conference speech you’ll always benefit when you are prepared, smart and tidy. And when you are in the glare of the lighting, with all the cameras and a captive audience, then it’s essential.

Get Ready For Your Conference Speech

Ed Davey knows the importance of prior preparation before any conference speech. And that preparation always includes your appearance!

You can always find plenty of public speaking tips with Time to Market to get you ready for your next big conference speech. And, when you need to take things to that higher level, please don’t hesitate to get in touch about public speaking training.