In an inspiring and motivating speech at the UN Women’s Conference Secretary of State Clinton set out a clear approach for women’s rights worldwide. And this Hillary Clinton UN speech was certainly clear and unambiguous. 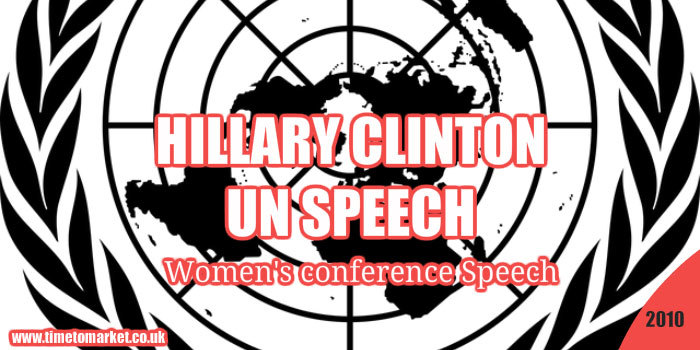 She’s not the most animated of speakers. But there was a memory of a hand-jabbing President Clinton ten years ago–nonetheless she made good use of her speech material. Stories, anecdotes and personal experiences all featured.

Lists were evident. For example, women were described as:

“The poor
The uneducated
The unhealthy
The unfed”

Unattributed quote references to Winston Churchill’s 1942 “End of the Beginning” speech and Martin Luther Kings 1963 “I have a dream” speech featured in:

“…the end of the beginning.”

And the Secretary of State also came up with a great phrase reversal in:

But inspiring as her speech was there were also some tough policy points. For example:

“President Obama and I believe that the subjugation of women is a threat to the national security of the United States.”

That was clearly a reference to the Taleban, but it could equally apply to other more peaceful parts of the World. We can hope that the USA’s championing of women’s rights does not herald new foreign interventions.

In a good, well-drafted 30 minute speech Secretary Clinton paced herself and paused well. She received a well-deserved acclamation from her audience.