Being recently savaged in a European Parliament speech by Nigel Farage MEP hasn’t knocked Herman Van Rompuy off his stride. The newly-appointed President of the European Council was in fine form at the College of Europe where we heard a Van Rompuy Bruges speech. 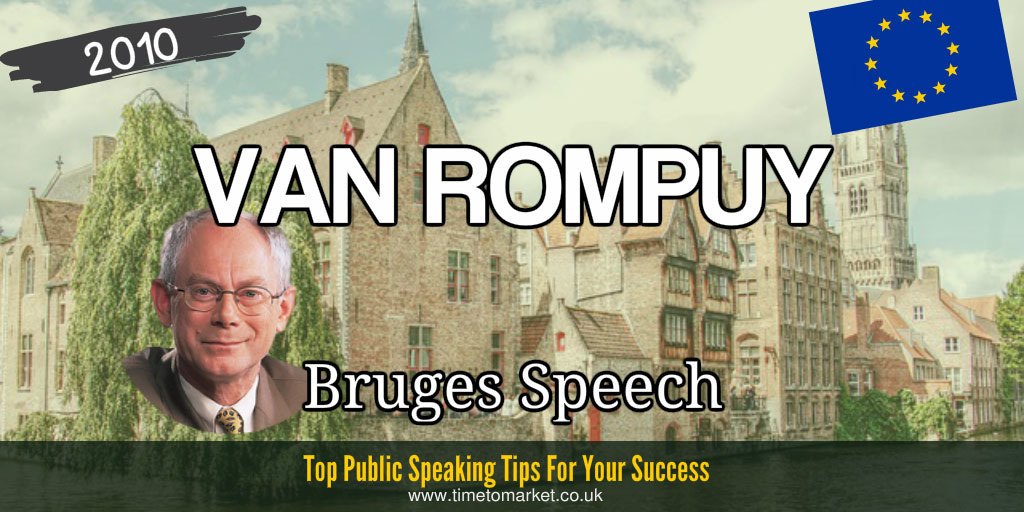 Van Rompuy Bruges Speech At The College Of Europe

Speaking in both French and English emphasised the nature of his job—bringing Europeans together despite our differences.

His introduction set the College of Europe into a wider context of European integration and European Union. This device allowed him to consider a few of the main players in the brief history of the European Union, before noting that he wasn’t here to honour them. With hints of Shakespeare’s Julius Caesar he noted that we honour them by asking what to do now.

The Challenge of Repetition For Van Rompuy Speech

The “main challenge” was repeated three times. And this enabled the President to outline the main thrust of his speech: how Europe should deal with the World.

Referencing the ports of Zeebrugge and Bruges he quoted from Shakespeare’s character Brutus, “There is a tide in the affairs of men” (Julius Caesar). This allowed him to explore geopolitical trends, World governance, climate change and economics. He followed with an assessment on the perception and reality of Europe’s position.

With his Shakespearean nautical theme firmly established Van Rompuy’s speech then concluded with an overtly “maritime” edge: Europe in the geopolitical ocean with 27 boats and 27 captains? Or Europe with one ship and one flag?

He likened the European Union to an interconnected convoy at sea. Beneath the waves, all the EU nations are interconnected. Sometimes they stray off-course but they share a common purpose, goals and values. Warming to this theme, Van Rompuy concluded with:

“I am convinced that we Europeans are able to break the waves, to weather the storms, and to steer our beloved convoy through the tides ahead. We have that choice. It is up to us to take it.”

Of course, Mr Van Rompuy isn’t the only one who is fond of the stormy metaphors. Because we heard similar metaphors in this stormy Cameron speech and also this George Osborne speech. So, he’s in good company. But, let’s note that the President’s Bruges speech writing and rhetoric are water tight.

But is the boat leaking?

You can always navigate your way to plenty of public speaking tips with our series of tips for speakers and presenters. And, with more than 100 top tips available, there’s something for every occasion. Plus, when you want to really boost your public speaking skills, then you’ll find a public speaking course to be just the answer you want. So, when the time is right, please don’t hesitate to get in touch.