President Karzai Speech: It Wasn’t Me

A blustering speech from President Hamid Karzai of Afghanistan left many international observers puzzling yesterday. Not least because this President Karzai speech came just days after a public dressing-down by President Obama. And it also came the day after the Afghan Parliament voted against his amendments to a law that banned non-Afghans from the UN-backed election commission that exposed last year’s election fraud. 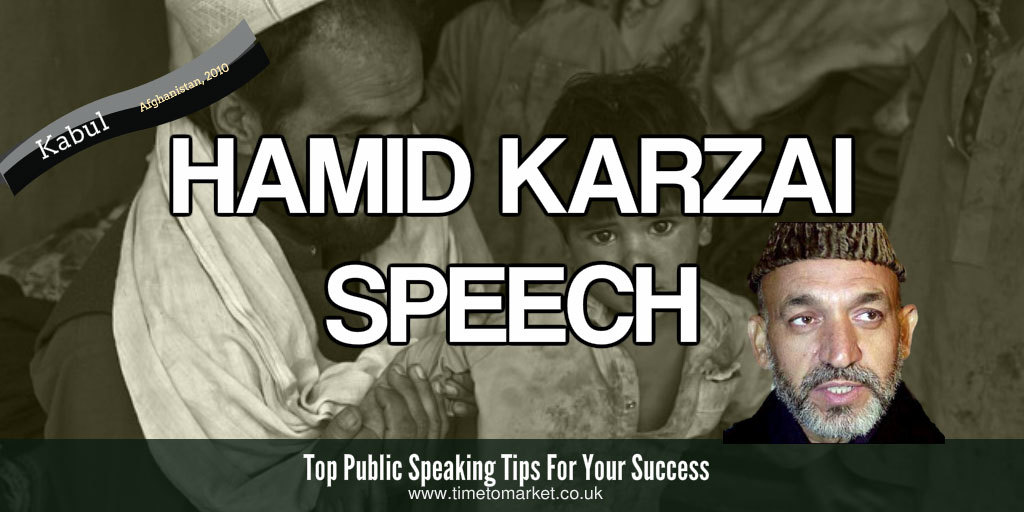 President Karzai Speech Is A Puzzle

Both puzzling and contrary. That’s the essence of the Karzai speech and it’s probably also a useful analogy for Afghanistan as well.

The speech carried few moments of eloquence but his repetition style near the beginning was noteworthy:

This was certainly not his best speaking performance. But it’s a political speech that signals more trouble ahead for Afghanistan and the international community. And, of course, that’s not what most people want to hear in a President Karzai speech.

Of course, you can discover loads of public speaking tips with our series of tips for speakers everywhere. So, if, like this President Karzai speech, you want to know what not to say in your speech, then now you can find out. And with more than 100 top tips, podcasts and videos available, there really is something for every public speaking event. Plus, when you need that extra bit of focus on you public speaking, why not book some public speaking training or a coaching session. Because a training course is the best way for you to really boost your skills and confidence. So, when the time is right, please don’t hesitate to get in touch.