No sooner had Lady Gaga been crowned the new Queen of Twitter than her most loyal fans were rewarded with a Lady Gaga speech in honour of the occasion. An acceptance speech, no less. But what a strange event you might think. 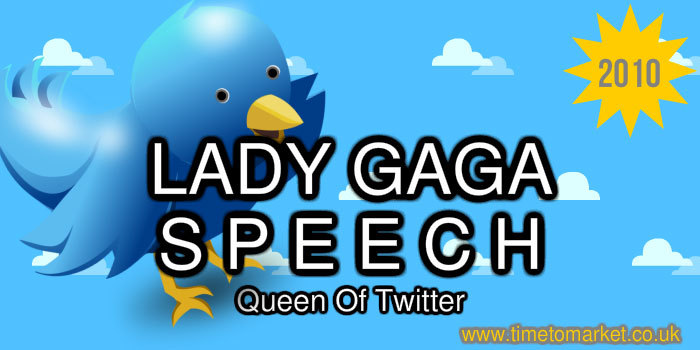 That’s because she’s just displaced pop princess Britney Spears as the Twitterer/ Tweeter with the most followers. Yes, that’s 5,670,779 followers. And, of course her followers are growing by the minute. She has made her ascendancy to the Crown that much faster than Britney Spears whose Twitter followers were amassed over many years. An incredible feat, but one that projects Twitter growth ahead.

Her speech, filmed in her dressing room, isn’t a work of presentation art. But, it’s pure Lady Gaga (and of course, the Twitter Bluebird). And that’s what her Twitter followers demand! The Queen of Twitter knows her audience on the Twittersphere only too well. She gives her short speech in a dulcet tone only interrupted as the message comes through that she’s wanted on stage. Pure theatre indeed. So, listen out for the Twitter bird song effects as she works her way through her speech.